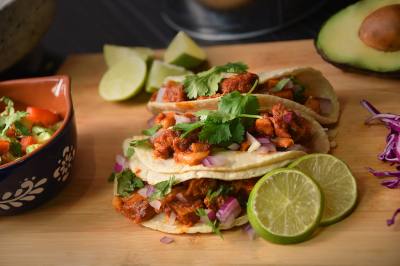 In the Cochinita pibil taco ($3.99) shredded pulled pork in salsa achioteis served with purple onion, choppedncilantro and a lime wedge.

With over 35 varieties of tacos to choose from, Taco Nation was opened in November by manager Enrique Farias and offers residents in The Woodlands another option for Mexican and Tex-Mex cuisine.

Farias, a resident of The Woodlands, said Taco Nation gives people a real taste of Mexican food and share food with the community. While many Mexican restaurants have a few types of tacos on the menu, Farias said one of the things that makes the eatery unique is they offer such several different choices.

“We have different kinds of food for everyone, and it’s a real taste of the different regions of Mexico,” he said. “In the north region, you have the carne asada tacos and on the coast, you have the Baja fish tacos.”

Farias said the menu reflects Mexican cuisine with a few Tex-Mex inspirations added in, like chips and queso. The most popular tacos ordered at Taco Nation are the beef tacos, available with Angus fajita beef, carne asada and barbacoa. Pork, seafood and poultry options, such as the chicken fajita taco and the chicken tinga taco, which is seasoned shredded chicken, are also available.

Customers can also order classic sides, such as Mexican rice, charro beans, refried beans and guacamole and chips. Burritos and quesadillas are also on the menu and include veggies, carnitas, chicken or beef. For those wanting dessert, freshly- made churros, empanadas and tres leches are available.

Farias said that while there are many other Mexican and taco restaurants in the area, Taco Nation is the first of its kind in The Woodlands.
The eatery offers unique vegetarian selections, like the Green Taco, made with grilled cactus and avocado as well as five signature sauces ranging from mild to very spicy. Fresh breakfast tacos—served all day, beginning at 7 a.m. on weekdays and 8 a.m. on weekends—at the restaurant include the fajita breakfast taco, mushroom and cheese, the barbacoa taco and a ham and egg taco.

Farias said he believes Americans are now choosing more tacos over burgers and fries, and he would like to expand Taco Nation in the future by opening other locations in the area. For now, the eatery offers dine-in, to-go and delivery options in The Woodlands.

“We’re different than other taco places,” he said. “We make our own tortillas and we have a big veggie option. We wanted something to give people that has real Mexican taste. We use high-quality ingredients. It’s something we wanted to share.”

Editor's note: In the article, Enrique Farias was originally identified as the co-owner. Farias was the manager, according to a spokesperson. The text has been updated to include this information.
SHARE THIS STORY