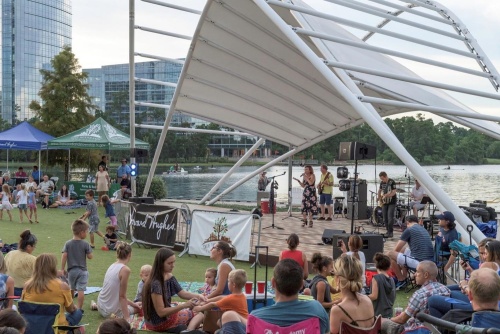 A variety of artists will perform at Hughes Landing this summer during the weekly Rock the Row concert series.

The Woodlands Township's summer concert series Rock the Row returns to Hughes Landing this month, offering six weeks of entertainment on the shore of Lake Woodlands.

Rock the Row will feature local and regional artists performing music from genres including pop, rock, country and soul. Concerts are free and will take place weekly from 7 to 9 p.m. at the Hughes Landing bandstand on Hughes Landing Boulevard in The Woodlands. The series is presented by The Woodlands Township Parks and Recreation Department and is sponsored by The Howard Hughes Corp., the developer of Hughes Landing.

Rock the Row runs from July 11-Aug. 15 and is scheduled to return for a fall season in October. Here are the musicians set to play during this summer's Rock the Row series:

For more information on Rock the Row, contact the parks and recreation department at 281-210-3800 or visit www.thewoodlandstownship-tx.gov/rocktherow.
SHARE THIS STORY