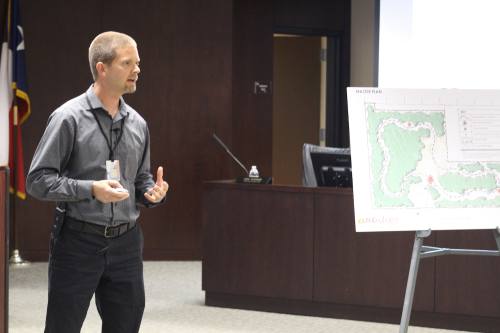 Shenandoah residents voiced their thoughts and concerns regarding a proposed park at the north end of Holly Hill Drive during an Oct. 2 town hall meeting.

Shenandoah Public Works Director Joseph Peart presented the stages and options available for the park, which 166 of 227 respondents to a survey conducted earlier this year said they were in favor of establishing.

Peart said the plan is to install a 1/3-mile walking trail through the 4-acre parcel. However, drainage and grading projects will need to happen beforehand and will cost an estimated $78,800.

"This site is going to need some drainage and grading work to be a usable park," Peart said. "Part of it is almost bowl-shaped, so it holds water long after it has rained. Right now, it would not be very pleasant if you put a path on it."

Opinions on the presentation were mixed, with several attendees speaking in favor of the project, such as Scott Campbell, who said the park is a good idea but should be completed in phases.

"This new park is great," Campbell said. "I believe what's attracted me to this city is what it is doing for its children ... I want to see more kids outside and in the parks. Shenandoah is a great walking community as it is. We have to look forward to keeping our kids engaged."

Resident Sandra Burch, who lives next to the parcel proposed for the park, said she is against the project as she is concerned about traffic congestion and about general safety after the sun goes down.

No final decisions were made during the meeting.