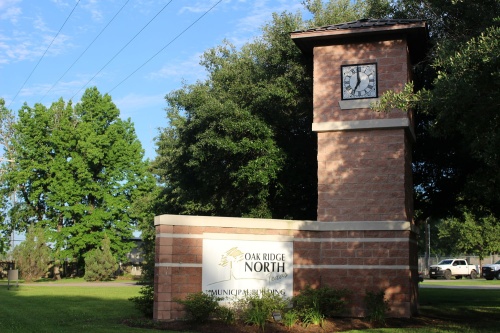 The Oak Ridge North City Council approved a 1.89% tax rate increase and a budget focused on infrastructure projects and city improvements for the 2019-20 fiscal year during its Aug. 26 regular meeting.

Oak Ridge North’s finalized FY 2019-20 budget includes $8.1 million in revenue and $9.2 million in expenditures. The $1.1 million difference is due to planned capital improvements partially financed through grants and reserves that are not budgeted revenues. The city’s general fund and water and sewer fund budgets are both balanced for the year, while the debt service fund is projected to see a $198,743 budget surplus.

The city’s capital improvement fund, which will begin the fiscal year with $2.24 million in available funds, will receive $806,606 in new financing for FY 2019-20. Around $2.13 million of the total fund is expected to be used for projects, purchases and related fees over the coming fiscal year, leaving an estimated $917,780 balance next fall.

Aside from the planned redesign of portions of Robinson Road, the city's largest capital project for the upcoming year will be the construction of a $600,000 regional detention pond facilitated by federal drainage grant. Other notable projects include improvements at Marilyn Edgar Park and Teddy Bear Park for $260,000 total and drainage channel and storm drain improvements for $190,000 total.

The budget and tax rate were each approved by a 4-0 vote. Council Member Frances Planchard was absent from the session.

“As far as the drainage [project], we have a grant and we’ll utilize that, that will be ongoing through the course of probably the whole year,” Mayor Paul Bond said after the meeting. “Other than that, at this point, really we’re kind of at the mercy of the county, whenever they get ready to facilitate both ends of Robinson Road … We’ll see where we go from here, but at least the budget’s done and we’re moving forward. I’m thankful for that.”

Following the regular meeting, the council adjourned to a closed session to discuss five agenda items. Council Member Alex Jones made the sole motion resulting from the executive meeting, requesting authorization for the city to get an appraisal of the property at 383 Robinson Road.

The 3.83-acre property will be developed as a 28,500-square-foot retail center, according to a listing with MHW Brokerage Services, LLC. The property is located at the northeast corner of the intersection of Robinson and Hanna roads and was valued at $575,000 by the Montgomery Central Appraisal District in 2019.

Jones’ motion for an appraisal was unanimously approved by the council.