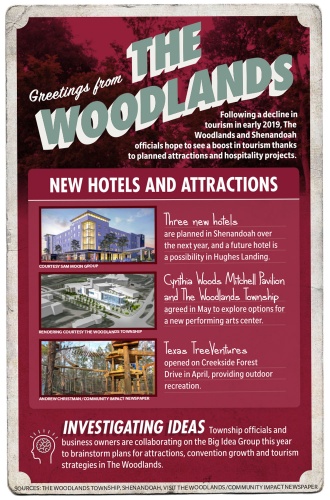 After several years of gains in hotel occupancy and sales tax revenue in The Woodlands, 2019 has seen less robust growth, leading officials and hospitality industry leaders to speculate about how to grow the local tourist trade.

Although hotel tax revenue in The Woodlands is up 1% midway through the year, growth is slower than projected, township officials said. The township had budgeted for 7.5% growth this year, said Monique Sharp, assistant general manager for finance and administration.

Plans to increase tourist appeal include a $4 million renovation of The Woodlands Waterway Marriott Hotel and Convention Center this summer as well as the possible development of a new performing arts center on the Cynthia Woods Mitchell Pavilion property. In addition, Visit The Woodlands—formerly known as the Convention and Visitors Bureau—has launched a revamped tourism effort this year and increased advertising targeting out-of-state visitors.

Shenandoah also continues to grow its industry with three more hotels slated for the small city in the next year, said John Mayner, Shenandoah’s Convention and Visitors Bureau director. However, no new hotels are confirmed for developing areas of The Woodlands such as Hughes Landing, officials said.

This summer also marks the formative stages of a group tentatively called Big Idea Group, township Director John Brown said. Members representing government and businesses in the area will look at the big picture of what The Woodlands could offer to distinguish itself, he said.

“We looked toward how we could sustain our hotel revenues and conventions. … We want to be looking at five, 10 years down the road,” Brown said. “With the growth in Montgomery County, there’s always somebody with another hotel. … These people are already planning, so we need to plan as well.”

The goal of attracting tourist dollars is to ultimately bring money from outside the region as a source for township revenue, officials said. Hotel tax revenue helps to fund tourism and marketing efforts, including local events, according to the state comptroller’s office.

“We got more aggressive with forecast numbers,” he said. “We were looking for an increase in hotel tax revenue. The first couple months were not good, but we see trends working in the other direction.”

Sharp said rapid growth had occurred in previous years, but that has now slowed.

“Although we are behind in hotel tax in terms of when we compare to the [budgeted amount], we are still 1% ahead of where we were last year,” Sharp said in July. “The other thing affecting us is competition just outside our borders. It’s going to be more moderate growth rather than the booming growth over the past several years.”

As part of the strategy to draw more visitors to The Woodlands and further build this industry locally, VTW began working with an advertising agency early this year to start advertising in other parts of the country, developed a convention sales tool and will add a new sales staff member next year, VTW President Nick Wolda said. VTW expenditures increased from $2.8 million to $3.1 million from 2018-19, according to the 2019 budget.

“In the Midwest and the Northeast corridor … especially in the winter when the weather is miserable, let’s get them down here and enjoy what we have to offer,” Rieser said.

A key source of tourism dollars in The Woodlands is conferences hosted by area hotels. The Woodlands has 14 hotels, including about 2,200 rooms and 160,000 square feet of meeting space, according to VTW.

Fred Domenick, the general manager of The Woodlands Waterway Marriott Hotel and Conference Center, said he believes the industry is healthy, but growth is not as strong as it was in previous years.

“Rates are not growing at the rate we would like them to be and at the rate we’ve enjoyed,” he said. “It’s healthier in the convention side than in the room side … but it’s still a healthy market in general compared to many other submarkets and markets.”

The Woodlands Waterway Marriott has housed such diverse groups as the Lunar Planetary and Science Conference and Copa Rayados Soccer Tournament. However, some conventions have outgrown the center. One Houston-area conference that had held its annual January expo at the Marriott until 2018 was the Houston Safari Club Foundation, said Joe Betar, the club’s executive director.

The HSCF relocated its annual convention to the George R. Brown Convention Center in 2018 because it required a larger space, Betar said.

“Although The Woodlands Waterway Marriott Hotel and Convention Center provided excellent service, we did outgrow the location,” Betar said.

Meanwhile, The Woodlands captured a conference in May when ConventionSouth chose the Marriott for its first time hosting the Rendezvous South conference in Texas. The conference features 160-170 attendees in the meeting planning industry.

In August, The Woodlands Waterway Marriott is completing $4 million in renovations for the convention center, including new carpet, paint, furniture, bathroom fixtures and updates to the skybridge.

Meanwhile, a new hotel could be on the horizon in Hughes Landing, where 825 acres are still developable, but the details are still unconfirmed, according to Howard Hughes Corp., which develops the site.

“An additional hotel in Hughes Landing is a possibility in the future, but there are no current plans to construct anything,” said Jim Carman, the senior vice president of commercial development.

The Westin opened a new restaurant, Sorriso Modern Italian Kitchen, as well as the Como Social Club early this year.  Also, The Woodlands Resort created a new customer service program and trained more than 100 employees this year, she said.

Hotel development continues elsewhere in the region, with three new hotels planned in Shenandoah, driving competition in The Woodlands area. The Aloft Hotel, Even Hotel and Hyatt House will bring an additional 384 rooms and 3,261 square feet of meeting room space when they open, Mayner said. The hotels are currently under construction.

Brown said one outcome of the Big Idea Group could be to find a way to open up more convention space in The Woodlands even if new hotels do not come onto the tax rolls immediately.

“At some point, conventions, like any other business, they grow,” he said. “If we added another [15,000]-20,000 square feet, we [would attract] a whole new range of conventions. That in itself could attract tons of hotel tax for the residents.”

Entertainment is also a draw for the area. The Cynthia Woods Mitchell Pavilion attracts popular artists and can boost hotel bookings and regional tourism, Domenick said.

In May, The Woodlands Township signed a memorandum of understanding with the Pavilion to explore the development of another performing arts center on its property. Aside from a conceptual drawing, no plans have been developed yet for the project, township officials said, although a 2015 study commissioned by the township indicated a facility could cost $48 million to $61 million to construct.

Ashley Gravois, the public relations and education manager for the Pavilion, said a new venue would help advance the Pavilion’s mission of presenting performing arts and outreach programs to the community.

“It is the goal of both organizations to work together toward enhancing arts amenities in the community, and this agreement is the next step in achieving that goal,” Gravois said.

Outside of The Woodlands, Shenandoah also has a number of hotels.

Despite consisting of only 2.2 square miles, Shenandoah currently has 10 hotels, not including the three under construction.

Mayner said he believes the city’s location is ideal for attracting visitors, whether that is for an event or for medical treatment at nearby hospitals.

“We have a unique situation,” Mayner said. “We have hotels; we have a variety of shopping options; we’re nearly at 50 restaurants in the city. For a city of our size … that’s pretty unique and surprising.”

Similar to The Woodlands, Mayner said the city’s hotel tax revenue was down 5.8% compared to the same time last year as of the May report, with a total of $1.01 million generated. He said this year may result in fewer gains than other recent years.

“Earlier this year, our bureau attended a luncheon where Jorge Franz, senior vice president of tourism for Visit Houston, was speaker, and he mentioned a softening [or] reduction in what they were projecting for this year,” Mayner said.

The city’s ability to draw conventions to its hotels as well as events positions it to gain tourism revenue, he said. Shenandoah is beginning preparations for its second year hosting the NCAA Stagg Bowl in December, which Mayner said brought more than 6,800 visitors to the city in 2018. Mayner estimated the city made a return on its investment of $6 to $15 for each dollar it spent on the event through sales to visitors.

The city and its CVB also redesigned their websites to be more user friendly and attractive this year. Mayner said he believes marketing efforts have been effective in bringing new visitors to Shenandoah.

Wolda said despite industrywide challenges, he believes the region is ripe for tourism interest in the future if it plans carefully and finds the right mix of attractions and amenities.

“What [are] the key differentials that The Woodlands has five, 10, 15 years from now that are going to keep us relevant and bringing the tourism dollars here?” Wolda said. “You’ve got to always be creating and doing.”