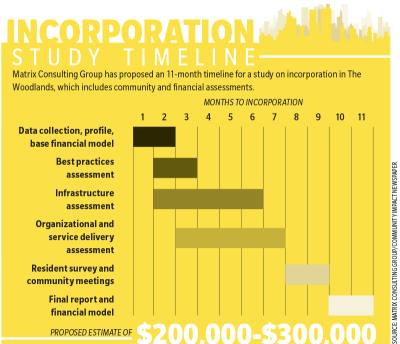 Matrix Consulting Group and HR Green have estimated a study to incorporate The Woodlands Township could take 11-12 months.

After submitting a request for proposals last year to find a consulting firm to conduct a study on incorporation, the township board announced Jan. 24 it has finalized a decision. The board voted unanimously to begin negotiations with Matrix Consulting Group, in conjunction with HR Green, to develop a study on the responsibilities, financial effects, community development and public engagement needed for the township to become the city of The Woodlands.

The township has until 2057 to incorporate before risking annexation from the cities of Houston or Conroe. In early January, the township board announced a short list of four consulting groups, including BerryDunn, Matrix Consulting, The Novak Consulting Group and Houston Advance Research Center.

“This is critical because of the choices that you and the community have that are going to result in this study,” Matrix Consulting Group President Richard Brady said in a Jan. 18 presentation to the township board. “You need to know the impacts of that in terms of money and in terms of service delivery in order to go further in this process. We are expert and have the experience in the impacts and the opportunity that they present for you.”

Additionally, the township board will also select a second firm to conduct a peer review and financial analysis of the study once it is completed. Matrix and HR Green estimated in their proposal the study could cost between $200,000-$300,000, however an exact cost to the township has not been announced.

“As part of the fact-finding process, it’s not just getting information from computers and tools and things like that,” Brady said. “It’s actually talking to people…the community is an important set of stakeholders here and we’ve got an extensive process that we’re proposing for online input as well as working with the community in town hall meetings and smaller focus groups.”

In their proposal presented to the township, representatives from Matrix estimated a study on incorporation in The Woodlands could take approximately 11 months to complete, while Township General Manager Don Norrell said it could take closer to a year.

An agreement from the negotiations could be brought back to the board for approval during one of the board’s February meetings, scheduled for Feb. 22 and 28.
SHARE THIS STORY