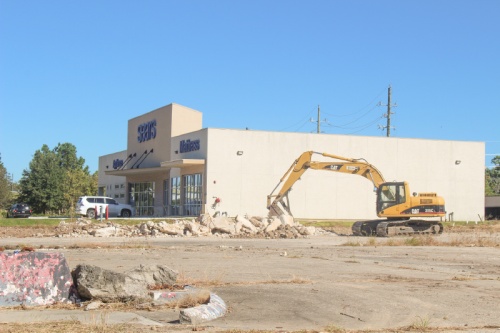 After months of delay and speculation, Oak Ridge North officials announced Oct. 23 that The Crowne Plaza Hotel & Conference Center, originally planned at the intersection of I-45 and Robinson Road, will no longer be developed in the city.

Mayor Jim Kuykendall said the city has been informally notified by the owner that the hotel, which was originally scheduled to open in mid-2017, will not be developed as planned. City officials have not yet given a reason for the cancellation of the project as of press time.

“This is disappointing news for the city as it was an important economic development opportunity with promising impacts,” Kuykendall said. “We are currently working with the property owner on cleanup of the site. We look forward to the future development of this important tract at the gates of our city.”

Oak Ridge North city officials and residents gathered July 2016 to officially break ground on The Crowne Plaza Hotel & Conference Center. Following the groundbreaking, the city faced issues with drainage easements for the hotel and construction of the project was delayed. The project was expected to increase sales tax revenue for the city for fiscal year 2017-18, but due to the hotel’s failure to materialize, the city reduced the projected sales tax revenue amount of $2,084,658 for FY 2017-18 to $1.8 million.

The 154-room hotel was originally supposed to feature a restaurant, lounge area, rooftop terrace, video conference room, business center, a luxury swimming pool and a fitness center, according to the developer, Avalon Hotel Group. The conference center would have connected to the hotel tower. About 75 new jobs would have been created as a result of the project and the partnership between Oak Ridge North and Avalon Hotel Group.

At the Oct. 23 Oak Ridge North City Council meeting, council members discussed the cancellation of The Crowne Plaza Hotel and unanimously approved a motion to authorize city staff to seek bids on abating nuisance violations and cleaning up the hotel construction site now that the project has been canceled.

“Apparently, the [property owner] is going to pull away from the [project]and look at what the options are,” Kuykendall said. “As you all know, we’ve had a lot of issues with the easement back there. Let me reiterate and say the city has no money involved in this project. Anything that has been spent has been given back to the city, and we are not out one dime.”

Building official John Beisert said after council members approved a motion to seek bids, the concrete for the hotel project will be picked up, and the construction zone will be cleared. Officials with the development company were not present during the meeting.

Future plans for the construction site are still under consideration and have yet to be determined, city officials said. Avalon Hotel Group could not be reached for comment by press time, and an official reason has not yet been given as to why the project has been canceled.
SHARE THIS STORY