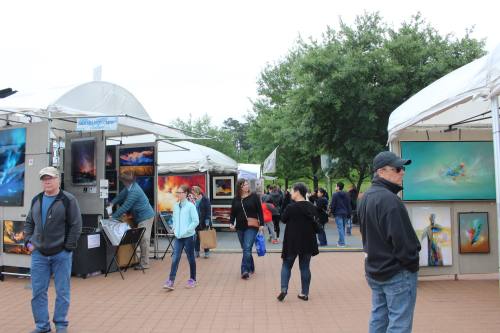 A community of residents with a growing passion for culture and art, The Woodlands Township officials are working to keep up with the increasing demand for local cultural arts.

The community is known as the home to facilities like The Cynthia Woods Mitchell Pavilion and events like The Woodlands Waterway Arts Festival. However, as the population continues to grow, surpassing 114,600 residents in February 2017, according to the U.S. Census Bureau, so do cultural arts organizations and events, pushing existing facilities to capacity.

“The Woodlands area has a very active cultural arts community with many offerings throughout the year,” township Director Ann Snyder said. “In my opinion, the market for the arts is large and growing in The Woodlands and surrounding areas. It appears there is a definite need and demand for cultural arts facilities.”

To address the increasing demand for cultural arts, the township is nearing completion on a study to determine if an arts center and natural science museum could succeed in The Woodlands.

After the township was approached by a group of residents in 2015 regarding the feasibility of an indoor performing arts facility in The Woodlands, the board of directors commissioned Gensler, an architecture firm, in collaboration with Webb Management Services Inc., to further investigate the possibilities.

The three-phase study began in February 2017 and wraps up this summer, township Chairman Gordy Bunch said.

“The purpose of the study is to investigate the opportunity to develop new cultural facilities for The Woodlands,” Webb Management President Duncan Webb said. “We completed the feasibility study work and are helping the client develop and refine the concept and begin the process of finding partners with whom to develop these facilities.”

Webb said early study results indicate that a center in The Woodlands is feasible, with two proposed, separate facilities under further consideration: a natural science museum and an arts center.

The proposed natural science museum would include exhibit, classroom and meeting space, a 200-seat lecture hall and a cafe. According to the study, the museum could potentially serve as a satellite location for the Houston Museum of Natural Science, and could cost anywhere from $35 million to $52 million to construct.

A similar concept—the Houston Museum of Natural Science at Sugar Land—opened in 2009.

“A big museum having a satellite campus of our caliber is very rare, so Sugar Land is very lucky to have this museum, as would The Woodlands be,” said Adrienne Barker, director and chief development officer for HMNS at Sugar Land. “It would make science so much more accessible and would benefit not just The Woodlands but all of Montgomery County and surrounding communities.”

The proposed arts center would feature a 1,000-seat large performance venue, a 250-seat small performance venue, a 150-seat multipurpose venue, two galleries, a digital media center and three classrooms. The proposed center is estimated to cost between $48 million and $61 million to construct and would likely be operated through an educational partner, according to the study.

“My hope would be that [the arts center] would host the same acts that typically perform at the Wortham Center or Jones Hall downtown,” Bunch said. “We would be better positioned for residents on the north side of Houston to attend a performance here in The Woodlands.”

Although no timelines, exact costs or locations have yet been identified, Snyder said one of the sites the board is considering is an 11.6-acre tract of land owned by the township at the intersection of Grogans Mill Road and Lake Woodlands Drive.

The newest addition to The Woodlands cultural scene is the Glade Cultural Center, which opened in April. Developed by the Glade Arts Foundation, a nonprofit organization based in The Woodlands, the center features a museum and commercial art gallery.

While the cultural center adds to the area’s multiple visual art venues, local performing arts groups said finding space for their productions, concerts and recitals can be challenging.

The Cynthia Woods Mitchell Pavilion hosts roughly 60-65 performing arts events, educational outreach programs and contemporary entertainment acts annually. However, the outdoor amphitheater is only open March-December and has partially covered seating, which can make attendance weather-dependent, according to the venue’s website.

The Nancy Bock Center for Performing Arts, located on the McCullough Junior High School campus, can be used by outside organizations; however, the facility’s use revolves around the Conroe ISD calendar. Keith Brumfield, founder of performing arts group Class Act Productions, said this can make scheduling performances challenging.

“It has become increasingly difficult to schedule our performances with the demands of the school calendar,” he said. “There are also time constraints and special concerns from the school that affect the performance quality.”

“[An arts center] would be great for all performing arts companies in the area,” Poland said. “We have some great stages at the schools here that have been wonderful facilities for us, but I’m sure an arts center would increase performance opportunities and create a more formal environment. We would definitely be interested in utilizing a space like that.”

Deb Spiess, president of The Woodlands Arts Council, founded in 2004, said her organization would also support the cultural arts project.

“We are similar to many nonprofits in our community in need of office, exhibit and/or performance space,” she said. “An arts center would be most welcome, as it could enhance our abilities to extend the reach of our programs.”

“Having a performing arts theater, a museum and the pavilion is an attractor for folks looking to host conventions here or for corporate relocations,” Bunch said. “We have a plethora of recreational amenities for residents and guests, and having some additional cultural amenities would be a huge plus.”

If the arts center and museum reach fruition, the projects would be funded through public and private donations as well as fundraisers, township officials said. Combined, Phases I, II and III of the study cost roughly $248,500 to conduct, according to the Township’s fiscal year 2018 budget. The pavilion has also committed to fund 25 percent of the study, not to exceed $25,000. Construction costs will be identified during Phase III of the study, Bunch said.

As the Cultural Arts Study wraps up this summer, township officials said they view the proposed projects as long-term investments that could benefit The Woodlands for years to come.