Meet the artist behind the Sam Houston statue: David Adickes 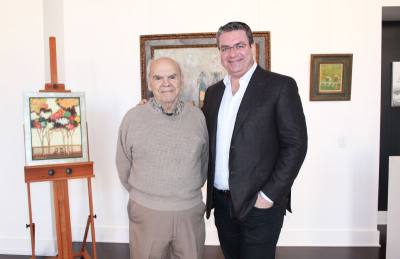 With the opening of the Glade Arts Foundation in January, The Woodlands will become the newest home to a permanent collection of Adickes’ work.

Born in Huntsville in 1927, Adickes graduated from Huntsville High School in 1943. Nearing the end of World War II, at age 17 he joined the Air Force and regularly traveled to France.

“I always liked art and was always drawing in the margins of my book,” Adickes said. “But being in Paris where there are galleries and museums on every corner—as just a small town kid from Huntsville, Texas—that was my turning point.”

After completing his service, Adickes returned to Huntsville and earned his bachelor’s degree from Sam Houston State University. He then studied art with artist Fernand Leger in France for two years before moving to Houston to open his own art school.

Since, Adickes completed a variety of large sculptures, which are exhibited around the Greater Houston area, including a 26-foot-long cornet located in Galveston, 36-foot-tall sculptures of The Beatles housed at Houston’s 8th Wonder Brewery and 43 presidential busts, each ranging from 18-20 feet tall.

Adickes said his favorite piece, however, is the 67-foot tall statue of Sam Houston located on I-45, which he dedicated to the city of Huntsville in 1994.

“Big Sam took me three years to complete,” Adickes said. “To this day, it’s still the biggest piece I’ve done and the piece I’m the most proud of.”

Spearheaded by Glade Gallery owner Dragos Tapu, The Glade Arts Foundation will house a complete timeline of Adickes’ work as well as rotating contemporary exhibits from local and international artists and traveling exhibits from other galleries.

Tapu said the gallery will also feature an outdoor sculpture exhibit and will push educational initiatives along with a scholarship program.

“This is the first time The Woodlands will have a fine arts museum and cultural center, so we want to tap into the plentiful local talent,” Tapu said. “[The community will] be able to experience the Houston environment right here in [their] own backyard.”

Adickes said he is excited about the new amenity, as The Woodlands holds a special place in his heart.

“George Mitchell was a good friend of mine, and he owned a bunch of my paintings,” he said. “I’ve followed The Woodlands since the very first acres were purchased, and I’ve always been impressed with it, so it’s an honor to have an exhibit here.”

Adickes is currently working on a statue of Sam Houston on horseback for Baytown and is also writing a musical about Pablo Picasso, which he said he hopes to see make it to the stage.

“I will continue painting as long as I can,” he said. “I don’t know how many more years that will be, but I love art and I find inspiration everywhere.”