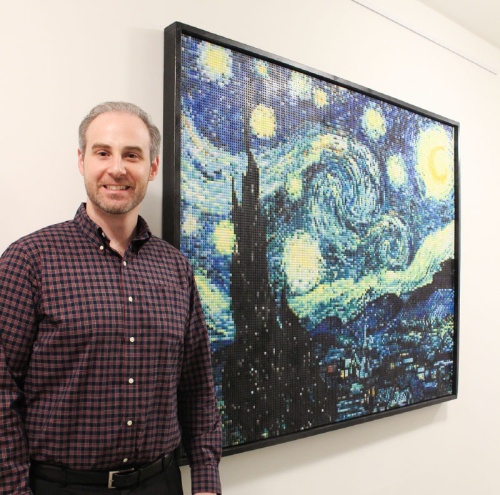 After The Woodlands resident Joseph Kraham and his wife Christy experienced the death of their Great Dane in 2014, he decided to memorialize their pet—with Legos.

“It was just supposed to be that one piece, and then I’d be done,” Kraham said. “But here I am, three years and 40 pieces later.”

As an engineer for ExxonMobil by trade and a father of three, Kraham said he found a unique creative outlet for someone with no background in art.

Kraham said he specializes in pointillism—an art style in which small, distinct dots of color form an image. Although the style is practiced by artists around the world, Kraham said he believes he is the first the use hand-painted Lego pieces to craft his artwork—a process he is in the process of getting patented.

“I have no art talent outside of this specific style,” Kraham said. “I can’t draw, paint or shade, but I can look at something and figure out how to build it out of Legos.”

The process begins with an image, which Kraham said has to be the right balance of contrast and resolution in order to work with. Then, through a computer program, he creates a sample reference that tells him approximately how many of what color Lego pieces he needs to create a piece.

“Lego officially only makes about 20 available colors with another 20 rare colors, so I hand paint about 300 different colors,” he said. “On average, my pieces are about 15-20 square feet each, and one square foot is made up of 1,440 Lego pieces … that’s a lot of Legos.”

Over the last three years, Kraham said he has spent approximately 2,300 hours on his artwork and has completed 40 projects. Some pieces Kraham has commissioned at an individual’s or a company’s request, like Cartoon Network, and others are for charity. His subjects range from superheroes and cartoon characters to classic paintings like Van Gogh’s “Starry Night.”

Kraham said one of his most notable pieces was a 20,000-tile portrait of the Houston Texans player, JJ Watt, which was signed by Watt and donated to the JJ Watt Foundation for charity in May.

Kraham’s latest project is a 44,000-tile portrait of the Houston Astros second baseman, Jose Altuve, which Kraham said he hopes will one day be showcased in Minute Maid Park.

“The piece I’m working on now is my most ambitious one,” Kraham said. “I started working on it before the Astros even made it to the World Series, and my biggest dream right now would be to get it in the stadium.”

After he completes his portrait of Altuve, Kraham said he plans to dedicate more time to classic art. The next project he is considering is Leonardo da Vinci’s “Salvator Mundi,” a portrait of Jesus Christ commissioned in 1490.

“Every project I’ve done this year has been to kind of one-up myself each time,” Kraham said. “I think people like this style because it’s Legos—they can relate to it. It just goes to show you that you don’t have to have a background in art to be able to reach people.”