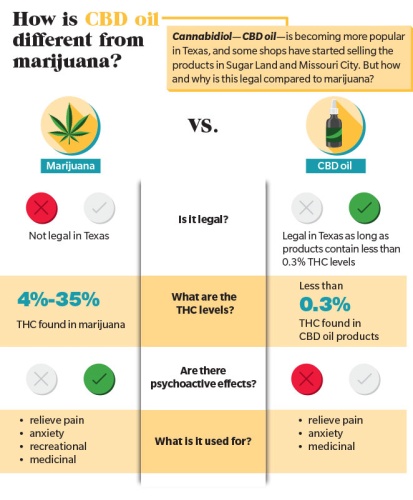 Cannabidiol—colloquially known as CBD oil—is becoming more available to Sugar Land and Missouri City residents as two standalone stores have opened and some local retailers have begun to sell the products since Jan. 1.

Although marijuana and CBD products come from plants in the cannabis family, CBD oils, such as the ones sold at the Colorado-based Sacred Leaf franchise in Sugar Land, are harvested from industrial hemp plants that do not contain enough tetrahydrocannabinol, or THC, to result in any psychoactive effects that provide a “high” feeling, store owner Debbie Hottman said.

While retailers can legally sell CBD products with levels of THC less than 0.3% to help relieve anxiety, pain and a multitude of other ailments, area physicians can also prescribe medical-grade CBD medication to treat epilepsy and seizures that can have THC levels of up to 0.5%, said Valerie Coffman, who is a nurse and the epilepsy coordinator for Kelsey-Seybold.

So far, Epidiolex is the only CBD prescription approved by the Food and Drug Administration to help treat epilepsy.

“I have investigated and continue to investigate new agents that can prevent and treat seizures,” Kelsey-Seybold neurologist Michael Newmark said. “It’s natural that we would want to investigate and use [CBD oils] due to the fact that it is a benign substance but also has some efficacy.”

CBD oil products with THC levels of 0.3% or lower are legal to purchase and consume in Texas, according to the federal Farm Bill passed in 2018.

“It is completely legal,” said Hottman, who opened Sacred Leaf in Sugar Land in February. “There is still a horrible stigma involved. If [people] just do their research, they’ll find that it’s legal.”

The process for patients to receive CBD prescriptions is more involved than walking into a retail store and purchasing oils on the spot. One brand—Compassionate Cultivation—based in Austin, provides medicinal CBD products used to help treat epilepsy that is intractable, or nonresponsive to surgery, said Michael Watkins, a pediatric neurologist at UTHealth and Memorial Hermann in The Medical Center.

Although prescription-level CBD products can reach THC levels up to 0.5%, Newmark said he does not believe the retail products are much different from medical-grade products.

“It won’t be terribly different, except in this aspect: When we’re treating epilepsy, we’re treating events, so we have things we can count,” he said. “If you’re treating pain or anxiety, you’re really flying by the seat of your pants. You don’t have any data to support what you’re doing.”

Texas began allowing medicinal CBD to be prescribed by physicians to treat epilepsy and seizures less than one year ago, Watkins said.

“We have a lot more people asking about it,” he said. “For me, it gives you another tool in your arsenal.”

“We’re certainly behind,” Reynolds said. “We should leave it up to Texans to decide. I think it would pass overwhelmingly.”

House Bill 1325 also awaits approval from Abbott, as of May 22. The bill legalizes the farming of industrial hemp plants in Texas.

The bill does not legalize medical marijuana in Texas. However, Reynolds said he believes Texans having access to CBD oils is a step in the right direction.

Trickling into the area

Suffering from arthritis and freshly retired from teaching, Hottman was curious to know if the products would work for her. She said she was amazed at how much relief CBD oils provided.

“I was on an anti-anxiety medication I had been on for 25 years, and I don’t take it anymore,” she said.

Hottman said she is already considering opening another Sacred Leaf location because it has been well received so far.

“There are not a lot of standalone, ‘this is all we’re going to have’ type of stores, and that’s what people want,” Hottman said.

“We don’t just put something on the shelf and carry it,” Bui said. “We want to really dissect it. This product is all organic for pets.”

Bui said she believes in the effectiveness of the products so much that she uses topical products on her son to help provide relief for his eczema.

“Because the product is organic, I’m able to use it on humans, too,” she said.

“What makes each thing different is the delivery system,” Hottman said. “It’s how you get it into your body. If you take an oil or if you vape, it’s going directly into your bloodstream.”

“It doesn’t cure—it’s not a magic pill, but it definitely helps,” she said.

Watkins said he thinks it is a possibility for CBD oils to be used in the future to treat epilepsy and seizures in lieu of other medications.

“I think it’s something that’s going to have to be heavily researched,” he said. “As time passes and restrictions change, you may see the ability to use CBD oils in other patients with epilepsy who don’t fit those exact criteria.”

Both Newmark and Watkins said they would not recommend prescription CBD oils be used on their own to treat epilepsy and seizures.

“Even I, being cynical as I am, think it is useful for some pain disorders, particularly the pain disorders that are associated with Parkinson’s disease and multiple sclerosis, which are diseases I see,” Newmark said. “I have noticed some anecdotal improvement in folks who are really miserable.”