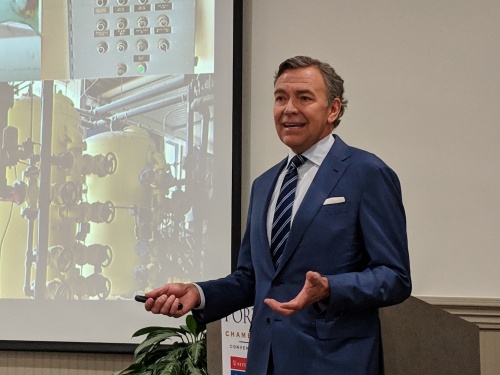 StreetLevel Investments' Brian Murphy gives an update on the Grid, a 192-acre mixed-use development in Stafford.

Now that the weather is better, Brian Murphy said more activity will be seen at the Grid in Stafford.

The 192-acre, $500-million development at the former Texas Instruments campus at 12201 Hwy. 59 with bring many unique aspects to the area, he said.

Murphy, the managing principal at StreetLevel Investments gave the update March 28 at the Fort Bend Chamber of Commerce. He highlighted the entertainment, retail, restaurant, office and residential features of the property, including a rooftop patio, food hall and pop-up retail.

On the Kirkwood Drive side of the development, In-N-Out Burger—the first in the Greater Houston area—will break ground in June and be completed in November, he said.

Murphy said other retail and restaurants will open next to In-N-Out in November, including Whiskey Cake Kitchen & Bar; Outback, which will move from 15253 Hwy. 59 in Sugar Land; Pluckers Wing Bar; and AT&T.

Aloft and Element hotels are expected to start construction in June and be completed in early 2020, he said. There will be 223 rooms and the two hotels will share common amenities. StreetLevel is also negotiating with another hotel, and Murphy said there will be a fourth hotel as part of a later phase.

StreetLevel is also in negotiations with other restaurants as well as three cinemas and a craft brewery operator. Murphy said he expects to make announcements on a few of them in the next 30 days.

In addition, Drive Shack, featuring a 74-bay golf driving range and shop, will open next September.

On the residential side, the leasing office for 1879 at the Grid at 11107 West Airport Blvd. is now open, Murphy said. About 2,400 multifamily units will be in the Grid when fully built out.