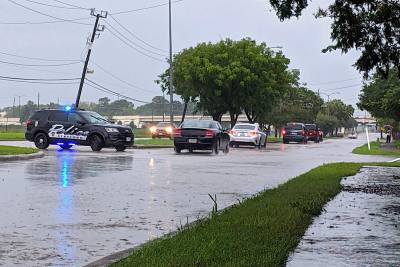 Stafford police kept an eye on road flooding near Hwy. 59.

Tropical Depression Imelda dumped more than 42 inches of rain in parts of the Greater Houston area, but the Sugar Land and Missouri City area did not receive as much precipitation, according to the Harris County Flood Warning System and the United States Geological Survey.

According to the Harris County Flood Warning System, Oyster Creek at Hwy. 6 peaked at about 73.6 feet on Sept. 19. Water remains high but is receding as of Sept. 20 at 10 a.m.

The threshold for likely flooding at this location is just over 75 feet.

Sugar Land received an average of 4.5 inches of rain from Sept. 18-19 with the majority of rainfall falling in about one to two hours. The Brazos River also experienced a 4-foot rise but remains below action stage, as of last night, according to city officials.

A flash flood watch is still in effect until about 7 p.m. Sept. 20, and officials with Missouri City, Sugar Land, Fort Bend County and Fort Bend ISD are continually monitoring the situation into the weekend.

FBISD is closed Sept. 20, but school is expected to resume Monday, Sept. 23.
SHARE THIS STORY