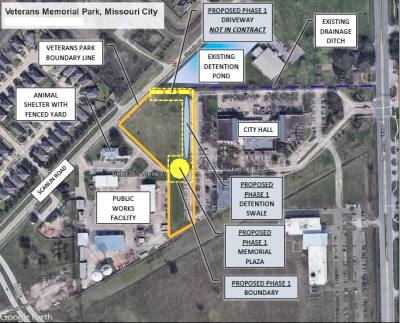 Council approved the projects at its May 20 meeting, including additional work on the Glenn Lakes Bridge and a new road connection between Cravens Road and Sam Houston Parkway.

The city began collecting funds for the memorial last year for the project, which will be located near City Hall. The design, based on a submitted design from Lloyd Lentz, principal of LMA Design, will include original schematics including a fountain, a flame, arched columns and a star.

City Manager Anthony Snipes estimates the project to cost $1.5 million, with $970,000 going toward construction. He said he hopes to reach the Phase 1 fundraising goal of $750,000 by July or August so a groundbreaking could take place near Veterans Day in November.

In addition, the city plans to create programming with Fort Bend ISD and Stafford MSD for students to take a field trip to the memorial and learn about branches of service.

The second phase of Glenn Lakes will replace the bridge over the Oyster Creek tributary. The project, estimated to cost $1.6 million, will be 50% funded by the Fort Bend County Mobility Bond Program, according to Shashi Kumar, the director of public works for Missouri City. District D Council Member Floyd Emery asked Kumar to provide additional construction and traffic considerations could be made to minimize detour confusion as well as noise.

The new project is expected to be completed in June 2020, Kumar said.

The go-ahead was also given for a connecting road between Cravens Road and Sam Houston Parkway near the new CityPark Logistics Center development. The city estimates road construction to cost about $3 million and will relieve some truck traffic that uses Gessner Road, Kumar said. In addition to Logistics Property funds, Fort Bend County committed $970,000 for its section of the road under its mobility bond package, according to city documents.

The city is also considering closing Cravens at Hwy. 90, which crosses Union Pacific Corp. rail lines, where train-vehicle collisions have occurred in recent years, according to the council and news reports.
SHARE THIS STORY

Sugar Land ranks as most business-savvy city in the country

National study by Verizon names the Houston suburb as "the heart of the American entrepreneurial spirit," according to city press release

The intergovernmental relations department re-capped the state's 87th legislative session, including bills that would impact the city

The restuarant is known for its gourmet hot dogs, which are served on grilled King’s Hawaiian rolls.

Read more about this year's event and the organization behind it—the Missouri City Juneteenth Celebration Foundation.

The new section will feature a variety of home styles, with designs for properties ranging from 40 to 75 feet wide. Models are expected to open in fall 2022 with home sales beginning around that time.