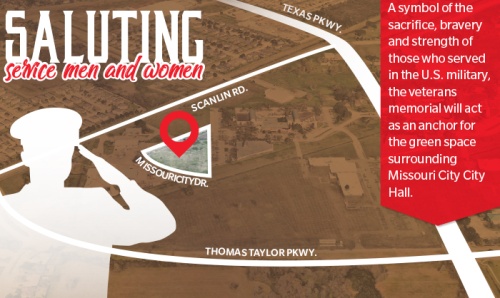 Missouri City staff and partners have collected approximately $400,000 of its $1.5 million goal to support its proposed veterans memorial, which will be located near City Hall, City Manager Anthony Snipes said.

“Our parks foundation is in the process of hiring a professional fundraiser,” Snipes said. “That entity will be responsible for pulling information together and going to foundations, state funding sources and local funding sources.”

The memorial is based on a submitted design from Lloyd Lentz, principal of LMA Design, Assistant City Manager Scott Elmer said. It will most likely be located immediately adjacent to the community center at City Hall, and original schematics include a fountain, a flame, arched columns and a star.

“My approach to the design is based on my conversations with my dad who was a B-24 pilot in WW II,” Lentz said. “I am also influenced by my relationships with a number of Vietnam veterans.”

Decisions about construction materials still need to be made, and there is not an exact timeline set for the project’s completion, Snipes said.

“Our hope is we’ll be having a ground breaking pretty soon because we do have about $400,000 that we’ll be able to utilize and start some of that work,” he said.

The veterans memorial will anchor the 25 acres comprising the City Hall campus, and there are plans in the works to renovate the property to include an amphitheater, additional walking space and park area, Elmer said.

“We’ll have one unified campus that starts at Texas Parkway and goes to the west and a little bit to the south and includes Quail Green West Park,” Elmer said.

The proposal for renovations came about after the city garnered feedback from City Council and residents, who expressed a demand for parks and recreation amenities, Snipes said.

“In our parks master plan—it was a community-engaged process—[residents] identified a number of things ranging from a skate park to green space and walkable space,” he said.

In its preliminary phase, the plan and scope of this project is not definitive at this time, and city staff is discussing proposals and details with consultants to be presented to the council at a later date, Snipes said. Staff has yet to determine the cost of this project.

Staff is pursuing several different funding options, including private donations and grant funding from state and federal agencies, Snipes said. The City Council may even consider a parks bond program—similar to the one approved in 2008—but no such decision has been made.