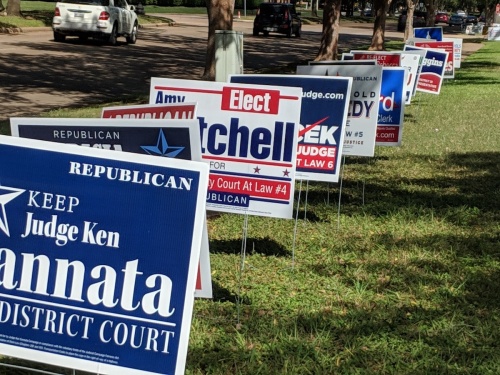 After 15 years of service, Fort Bend County Judge Robert Hebert, a Republican, will be replaced by Democratic challenger KP George. In a close race, George received 52.91 percent of votes.

“I am very honored that people elected me,” George said. “I know it is an enormous responsibility. My top priorities are community engagement and emergency management so when [something like] Hurricane Harvey happens we know what to do and what’s going to happen.”

George will continue serving on the Fort Bend ISD board of trustees prior until Dec. 31 before his term as judge begins Jan. 1.

In addition to a new judge, Fort Bend County has a new Precinct 4 commissioner. Newcomer Ken DeMerchant, a Democrat, ousted Commissioner James Patterson, a Republican who has served for 19 years. In another close race, DeMerchant received 51.63 percent of votes.

“I’m very honored to have been chosen by the community to represent them,” DeMerchant said. “I’m looking forward to this new challenge in my life. Fort Bend County is such a diverse community. I really want to embrace that diversity and go out and listen to the different people in the community and get ideas from this wonderful mix of people and build upon what’s been put in place.”

Missouri City City Council will see two runoff elections for mayor and at large Position 2. In Fort Bend County, incumbent Mayor Allen Owen received 36.06 percent of votes, according to unofficial results, while challengers District A Council Member Yolanda Ford and Fred G. Taylor garnered 34.93 percent and 29.01 percent, respectively. In Harris County, Owen received 18.94 percent of the vote, while Ford and Taylor received 46.24 percent and 34.82 percent, respectively. Owen and Ford will face each other in a runoff election Dec. 8.

In accordance with the city's charter, Ford's seat is vacant whether she is elected as mayor or not. The city is accepting nominations to fill the seat until Friday, Nov. 9.

In addition to candidate races, Fort Bend ISD's $992.6 million bond referendum was approved with 74.71 percent of voters in favor of the bond's passage.