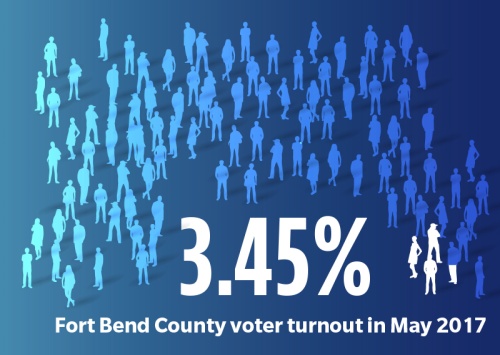 Fort Bend County’s Office of Election Administration reported low voter turnout for the May and November 2017 general and special elections with only 3.45 percent and 6.76 percent of registered voters casting ballots, respectively.

Texas historically ranks at the bottom of states in national elections in terms of voter participation, said Richard Murray, political science professor at the University of Houston.

“Registration is fair, but actual turnout at the polls usually lags in the bottom five of the 50 states, and that’s in the elections for president and Congress where there is a pretty high level of voter participation,” Murray said. “In down-ballot races, party primaries, local elections—mayor and school board—turnout is terrifically low in Texas in most cases.”

Particularly in big metropolitan areas, citizens are unfamiliar with their local governments, and many residents are not aware of the congressional districts they live in or when school board elections take place, Murray said.

“The single largest source of information that people rely on is television, but television doesn’t cover very much about local elections,” he said. “It focuses on crime and other issues that don’t have much directly to do with politics and voting.”

Murray said excessive media attention is devoted strictly to national government, especially in recent times, and this overshadows local issues and policy. Even with the use of the internet and the advantage of accessible information, citizens may still remain uninformed due to their own bias and  reliance on social media, which may include dubious content.

“People only want to expose themselves to information that basically is the kind of views they already agree with,” Murray said. “There’s a lot more information out there than ever in the history of human beings, but that doesn’t mean we’re particularly better informed.”

Primarily focused on local races and issues, elections in odd-numbered years see particularly low rates of voter turnout in the county, ranging from 3.5 to 13.4 percent from 2011 to 2017, according to the Fort Bend County Office of Elections Administration. In contrast, midterm and presidential elections in even-numbered years see dramatic increases in voter turnout, which ranges from 36.8 to 65.3 percent from 2010 to 2016.

Fort Bend County Judge Robert Hebert said it is up to individual citizens to educate themselves on local policies and issues. Hebert attributed the low turnout to a lack of controversy.

Some county residents were particularly unmotivated to participate because they live outside city limits, and the elections did not directly affect their lives, he said.

Sugar Land Mayor Joe Zimmerman said although voting is a civic duty and a fundamental right, some may not consider it a priority, especially when they feel satisfied with their quality of life.

“There’s a lot of demand on people’s time, and we all make choices as to where we think it’s most important for us to allocate our time,” Zimmerman said.

Representation in government would be skewed and disproportionate if only a small percentage of citizens engaged in policy decisions, Hebert said.

“Do you really know the intent of the electorate if only 3 percent of the qualified voters vote?” Hebert asked rhetorically. “That tells you what the 3 percent wanted...but does that really tell you what the larger body [wants]?”

If a small fraction of the population shows up to the polls, it may not reflect the best interest of the community, Murray said.

“If you don’t vote, your vote doesn’t count, and it gives greater weight to the people who are showing up,” Murray said. “That tends to be people that are whiter, older, more conservative, so it gives them a disproportionate influence in the way government works and the interest it responds to.”

Not voting can bring challenges, especially for a region as diverse as Fort Bend County, Murray said. Equal representation occurs when residents from different demographic groups speak through their vote.

“That’s important particularly when you have fast-growing populations in counties like [Fort Bend],” he said. “The Latino and Asian populations are surging but not so much [in] political influence, partly because voting has lagged behind.”

“They dominate most local elections because voting is so low among other citizens,” he said.

However, data indicates a change in this status quo as more minority residents participate in elections, particularly presidential races, Murray said. The secretary of state asked each county to run a tabulation of who voted both in the 2012 and 2016 elections.

“There’s also a bump up in Asian voting in the 2016 election,” Murray said. “Partly because I think President [Donald] Trump was so aggressive and attacking immigration generally and some immigrant communities that it heightened the interest among people that hadn’t perhaps been paying that much attention to politics.”

Despite the significant effect local politics have on daily life, far more residents get interested in, talk about, register and vote in presidential elections than in any local elections, which tend to yield more direct results, Murray said.

For example, then-high school student Mike Floyd beat out longtime incumbent Rusty DeBorde in May 2017 with 54 percent of the vote for a seat on the Pearland ISD board of trustees.

“That’s only possible in one of these local elections where you go out and work your tail off and get some other people involved and interested,” Murray said. “Sometimes, you can clearly make a difference.”

“City Council makes the decisions on streets and sidewalks and parks and fire trucks and police officers,” he said. “Those are the things that affect your lives every day.”

Despite low voter turnout, Hurricane Harvey prompted some citizens who experienced flooding in their homes to take political action as Levee Improvement District 19 residents petitioned to hold an election to select five directors to manage the LID.

LID directors are typically appointed by the county, Hebert said. However, the voters want more direct control over how the LID operates.

“I believe it’s a response to the frustration felt because the homes, they were behind the levee,” Hebert said.

It is not unusual for natural disasters to have a meaningful effect on politics, Murray said.

“You can’t restore a lot of these communities or homes unless there’s an awful lot of government money available,” Murray said. “Other decisions have to be made, like, ‘Are you going to build more reservoirs? Or strengthen the ones that exist?’ Those are political things.”