Many roads around Spring Creek and nTomball were impassable during the flooding. With development  expanding in the Greater Houston area, Sen. Borris Miles, D-Houston, wants the region to take a closer look at its flood mitigation efforts. In light of costly and deadly weather events over the past couple years, Miles is proposing the creation of a 12-member task force to assess the existing flood control infrastructure in Harris and Galveston counties.

Senate bill 1269 passed the Senate committee on agriculture, water and rural affairs Thursday. If enacted, the bill would create the task force to study necessary improvements for those areas and report back to the state by Dec. 1, 2018. Miles said in a statement Tuesday that the University of Houston’s Cullen College of Engineering would be a lead point of contact for the task force.

“The new flood study is desperately needed,” Miles said during the committee’s hearing Monday. “The American Society of Civil Engineers gave Texas a D on its most recent flood infrastructure ranking, yet Texas is second only to Louisiana in dollars paid out in flood claims.”

During the hearing, Stephen Costello, city of Houston chief resilience officer, told the committee he supports the bill and said the task force would work in collaboration with the Harris County Flood Control District’s efforts. The bill states that the district would act as an advisor to the task force, some of whose members would be appointed by the leaders of Houston and Harris and Galveston counties. Jason Smith, UH system vice chancellor for governmental relations, also testified in support of the bill and said Cullen College’s staff were suited to the study.

“The overwhelming majority of development in Houston-Harris County region has occurred over the last 35 years,” Smith said, “and flood mitigation and protection has not caught up with the rapid pace of development during that time.”

He said that UH’s main campus’ third ward location in Houston is an example of an area impacted by development that contributes to flooding.

“The population of Harris County alone has increased by 26 percent [since 2000] and development has contributed greatly to the flood and drain problem, increased severity in flood effects not just for the region but for Texas’ economy as a whole,” Miles said. “The Houston floods of May 2015 and in April 2016 cost us about $2.5 billion [in] economic activity and killed 16 people.”

This photograph—taken by Caleb Brown with a camera-equipped drone—shows the downtown Katy area of Hwy. 90 and the flooded portions of the city along Avenue D.[/caption]

While the bill does not include a budget item, Miles’ Communications Director Justin Concepcion said the Senate’s budget proposal was passed with a rider for funds that could cover up to $1.5 million in possible costs related to conducting the study.

Sen. Lois Kolkhorst, R-Brenham, recommended Miles add the Texas Department of Transportation to the task force so that members could potentially use State Highway Fund 6 allocations. Committee Chair Sen. Charles Perry, R-Lubbock, said he supported the bill but was concerned that efforts could be duplicated between the task force and other state or local entities.

“I don’t think I can express enough that we do a really bad job when we’re not working together very well, especially in an area that demands that coordination,” Perry said. “So as you go through that task force, keep that [in mind].”
SHARE THIS STORY

The constable received a positive test result after experiencing a low grade fever and no other symptoms. 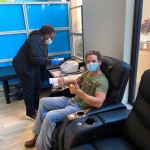