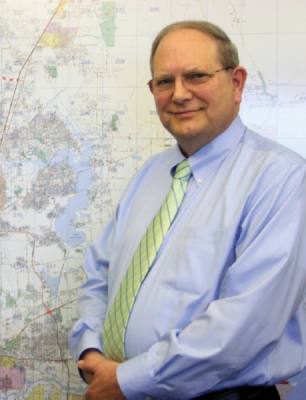 Gary Trietsch, who has served as HCTRA’s executive director since 2014, announced his retirement in early January. (Shawn Arrajj/Community Impact Newspaper)

The head of the Harris County Toll Road Authority will be stepping down at the end of this month.

Gary Trietsch, who has served as the HCTRA’s executive director since August 2014, announced his retirement in early January. As executive director, Trietsch is tasked with constructing, maintaining and operating all toll roads in Harris County as well as managing nearly 1.5 million customer accounts.

Prior to serving in his current capacity, Trietsch also served as vice president of Dannenbaum Engineering Corp. and had a 40-year career with the Texas Department of Transportation, having served 13 years as the Houston district engineer.

During the Jan. 7 Harris County Commissioners Court meeting, Judge Lina Hidalgo and each of the four commissioners expressed their gratitude for Trietsch’s years of service.

“I got your letter of retirement as well, and it made me sad because of the great skill and effort you’ve given to us, and I appreciate what you’ve rendered,” Precinct 4 Commissioner Jack Cagle said during the meeting. “Thank you for using your data and your research to drive your engineering and the way that you construct. That was one of your greatest achievements, and the taxpayers should be forever grateful to you.”
RELATED STORIES

Hidalgo added an item would be on the agenda for the next Commissioners Court meeting Jan. 28 to discuss what will happen in the interim as the county searches for Trietsch’s successor.

“Anyone who works in the government takes on an incredible amount of responsibility, and you’re delivering services to members of the community who don’t know yet that they’re going to benefit from the work being done, so we’re very, very grateful,” Precinct 2 Commissioner Adrian Garcia said.

Garcia added he thinks the team Trietsch is leaving behind is equipped to take the reins in his absence thanks to Trietsch’s leadership.

“That’s the one good thing about retiring: [I’m] leaving [the HCTRA] in well-protected hands, so no one has to worry about whatever comes next,” Trietsch said.
HCTRA Harris County Toll Road Authority Harris County Harris County Commissioners Court
SHARE THIS STORY