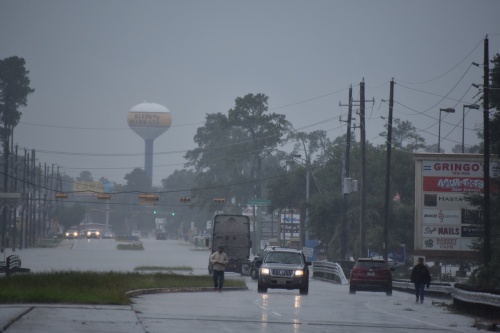 The Italian restaurant opened at Cypresswood Drive and Stuebner Airline Road in 2006.

Smith said the shopping center where his business is located has always been spared from flood damage in the past, but this time the water level rose to 3 feet inside the restaurant. The shopping center also houses a Rao’s Bakery, Gringo’s Mexican Kitchen, Bike Barn and several other businesses.

“[It was] pretty devastating thing to see, watching it from Facebook videos … you could see the water level so you know the damage, and then to not be able to go for two days—it was difficult,” Smith said. “But we did go back in.”

Smith said about 20 volunteers helped to remove everything from the restaurant over a three-day period and contractors hired by the landlord will remediate the water damage.

“Thankfully, we had so many people offer to help and support, we actually had to tell some, ‘Oh, we’re good for today, maybe tomorrow.’ The response for help has been heartwarming,” Smith said.

Smith said he is still in the process of filing insurance claims, and he hopes to reopen in November after repairs are completed.

“I think we are going to be up against a shortage of labor and maybe even materials,” he said. “I can see that happening with the magnitude and the breadth of the problem, that it is going to take a little longer than people would like.”

He estimates the cost of damage to his business could be as high as $250,000.

“Everything in the kitchen will need to be fixed,” Smith said. “[There is a] likelihood we will have to replace everything.”

Despite the difficulties he now faces, Smith said he is grateful to be safe and able to rebuild.

“I’m taking solace in the fact that I’m okay, I still have other businesses," he said. "But this was my bread and butter, this was my baby, the one I put most of my effort and energy into.”
SHARE THIS STORY