The deadline to apply for FEMA assistance for homes damaged during Harvey is Nov. 30: Here’s what you need to know 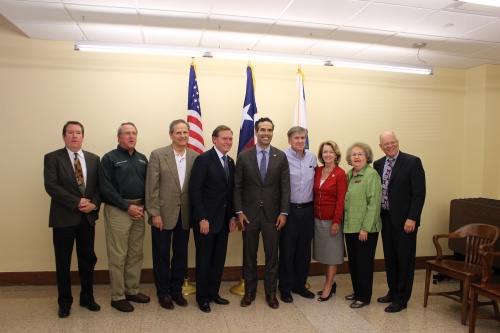 Despite the Nov. 30 deadline to apply for assistance from the Federal Emergency Management Agency, Texas Land Office Commissioner George P. Bush’s message to homeowners who experienced damage during Hurricane Harvey during a roundtable discussion with local elected officials Nov. 28 was clear: There is still time to apply for assistance and options to receive aid.

“The process is not over if you have been declined by FEMA,” Bush said. “There are other federal resources coming in the form of Community Development Block Grant Disaster Recovery money.”

Those other federal resources come from a $58 million donation from the U.S. Department of Housing and Urban Development Community Development Block Grant Disaster Recovery Program, the largest block grant ever given to the state of Texas in the wake of a natural disaster, according to Bush.

U.S. Rep. Pete Olson’s Office hosted the roundtable discussion although Olson could not attend and phoned in for the first few minutes of the meeting. Fort Bend County Commissioners Vincent Morales and Andy Myers as well as several other representatives from the cities of Richmond, Rosenberg, Needville, Katy, Fulshear, Weston Lakes, Simonton, Sugar Land and Missouri City were also in attendance.

During the roundtable, Bush announced his office has created five new programs with the help of FEMA and the U.S. Department of Housing and Urban Development to help residents affected by Harvey.

“This is the first time in Texas state history that a state agency has been asked to lead a temporary housing program,” Bush said.

Fort Bend County residents who have not applied for FEMA assistance yet only have until Thursday, Nov. 30 to apply for one of the five programs. If a resident has already applied for assistance, however, the Nov. 30 deadline does not apply.

New housing programs
Bush’s office was tasked with creating a temporary housing program from Gov. Greg Abbott three weeks after Harvey made landfall. Bush said past solutions during major storms, such as using portable trailers like the government did during Hurricane Katrina, would not suffice for the lack of housing and sheer volume of people in need in the county.

“Because of the magnitude of the storm it is not going to be addressed strictly by…trailers which is the traditional FEMA approach,” Bush said. “In our agreement, we structured five housing programs that range from that traditional approach to a direct repair program.”

Since Hurricane Harvey hit the Gulf Coast in August, 888,000 people have filed FEMA claims.
The five programs have been available to FEMA applicants since five weeks after the storm, but not many have been identified as being eligible for the programs.

In total FEMA found 2,132 households that need funding assistance beyond the individual assistance they received, and of those homes 1,800 families reported back to FEMA, rescinded their request and said they do not have any remaining unmet needs.

“So that leaves us with just shy of 394 households who FEMA has designated as eligible in still needing assistance through the direct housing program,” Lagrone said.

A step up from the travel trailers, manufactured housing units are larger trailers that can be placed on the private property of the applicant.

“We are working directly with FEMA and we are using FEMA’s inventory to place units in your county,” said, Heather Lagrone, deputy director for the Texas General Land Office.

The third program, a direct lease/multifamily lease and repair program, concerns renters who have not been assisted and need housing options not normally readily available in the market, according to Largone, but the program has not seen much action.

“So far in your county and so far statewide we have not had any private property owners who are interested or participating in that direct lease program,” Largone said.

A fourth program that also does not have any interested applicants is the direct lease program in which the state leases an apartment for an applicant that is unable to find housing.

The last and only permanent program is the direct repair program, which offers homeowners up to $60,000 of direct repairs. There are only 20 households in the county that have qualified for direct repair and 884 across the state.

“It is not a complete repair to the home,” Lagrone said. “It is definitely a partial repair to get it back to a habitable circumstance.”

Program deadlines and qualifications
Lagrone and Bush advised officials to remind their constituents to apply for FEMA assistance and to appeal any denial letters in order to access one of the five new programs.

“They should issue that appeal so they can stay in the eligibility consideration for the programs,” Lagrone said.

While the deadline to apply for FEMA assistance is Nov. 30, this deadline does not apply to any appeals. Lagrone advised that any appeals must be made within the timeframe provided by FEMA.

To qualify for any of the five new programs, some of the requirements include that applicants must have sustained $17,000 or more in damage as estimated by FEMA, the applicant must own the property, the owner cannot have had insurance and the property cannot be located in a floodplain. FEMA is reimbursing 100 percent of all five of the programs, according to Bush.

Near the end of the meeting Bush announced plans for a sixth program for residents with under $17,000 in damage and less than a foot and a half of floodwaters that was used in Louisiana and is known as the Step Program. Another program includes a statewide flood buyout program, but Bush cautioned that program could take years.

“We are working on a flood buyout program statewide in the event that municipalities and counties step forward and say we want to enter into such a program…” Bush said. “We are doing everything legal and ethically possible to get it to Texas as soon as possible.”
SHARE THIS STORY