In some areas of Manvel and Pearland, the pandemic has not slowed residential real estate. (Courtesy Adobe Stock)

When the coronavirus hit and began to shut down schools and the economy this spring, home sales began to drop across Houston.

When sales dipped in March and April, Hillwood Communities General Manager Russell Bynum said he thought the real estate market needed to brace itself for a financial hit.

“In our minds, if people aren’t showing up, they aren’t going to buy. So, we thought, ‘OK, we will see sales diminish,'” he said.

Hillwood Communities includes Pomona, one of the newer communities in Manvel, near Hwy. 288. In May, Pomona sold a record number of homes, Bynum said. Bynum attributes the community’s success in the midst of a pandemic to its location and to stay-at-home orders this spring helping people realize they want something different with their home.

Sparrow Realty agent Alina Rogers said she has noticed many of the same trends in the Pearland and Friendswood area. In the 77578 ZIP code, more homes were listed in April 2020 than in April 2019.
RELATED STORIES

“We have actually seen more people looking at rates,” Rogers said. “We have people saying, ‘We saw this house, and we weren’t thinking of moving, but we are now,’ or ‘Being stuck in our homes made us re-evaluate, and we want a pool.’"

When the pandemic hit, home sales dropped across Houston in March and April, according to Multiple Listing Services.

“The big shock to the market came in April,” said Dr. Luis Torres, a research economist at Texas A&M University.

Pomona sold 17 homes in April, around 25% less than it had originally projected for the month, prior to the pandemic, Bynum said. However, it was more than Bynum expected given COVID-19.

“If you had told me at the beginning of the month we would have 17 sales, I would have been ecstatic,” Bynum said.

In May, Pomona sold 41 homes; the most the neighborhood had ever previously sold in a month was 26 homes. Bynum and Rogers attributed home sales to buyers becoming more serious since the start of the pandemic.

“They have this tenacity to get into the marketplace and buy a home,” Bynum said.

Pomona has started offering virtual tours, which Bynum said have been popular. Rogers said she has not seen many buyers interested in a tour, which she attributes to most buyers being ready to make an offer. Because of this, the buyers want to brave the potential threat and view homes in person.

“Every buyer I have had is ready and wants to buy in the next few weeks. If we are going to go out and show a house, they are ready to make an offer right away,” Rogers said.

With more serious buyers, the numbers of new listings have been decreasing in Pearland and Manvel, and homes are not sitting on the market as long. However, listing numbers vary by neighborhood, Ralph said.

“We have had buyer demand, though listings have remained lower,” Ralph said.

Homes are moving so quickly off the market that there are often multiple offers for listing prices on the same home, which is unusual, Rogers said.

“We are getting multiple offers on a lot of listings, especially those in the low $200[,000]s,” Rogers said.

The average home price in Manvel is the low $300,000s, according to data from Houston Association of Realtors.

Due the pandemic, interest rates on mortgages are also low. That, combined with people spending more time in their homes, has created a “perfect storm” for selling a home, Bynum said.

The future of Houston real estate

While Sparrow Realty sells throughout Houston, Rogers said she has seen continued high demand in the Pearland and Manvel areas since the start of the pandemic. She and Bynum both chalk up this success to the area's proximity to the Texas Medical Center.

“In the Pearland and Manvel area, we have lots of people commute for work to the medical center. Fortunately—and unfortunately—we have a lot of work for the medical field,” Rogers said.

The oil and gas industry has suffered dramatically since the start of pandemic, which has affected the economy in the region overall, Torres said.

The region has suffered from job losses in this area, with 330,000 jobs lost in the oil and gas industry, according to June unemployment data.

What happens to the economy over time may affect Houston real estate broadly, Ralph said. However, she said she is optimistic about the future.

“Houston has done a great job of diversifying over the years. I’ve been in business 40 years. I have seen it firsthand,” Ralph said.

The increases in people working from home and in homeschooling have driven a lot of home sales as well, Rogers said. 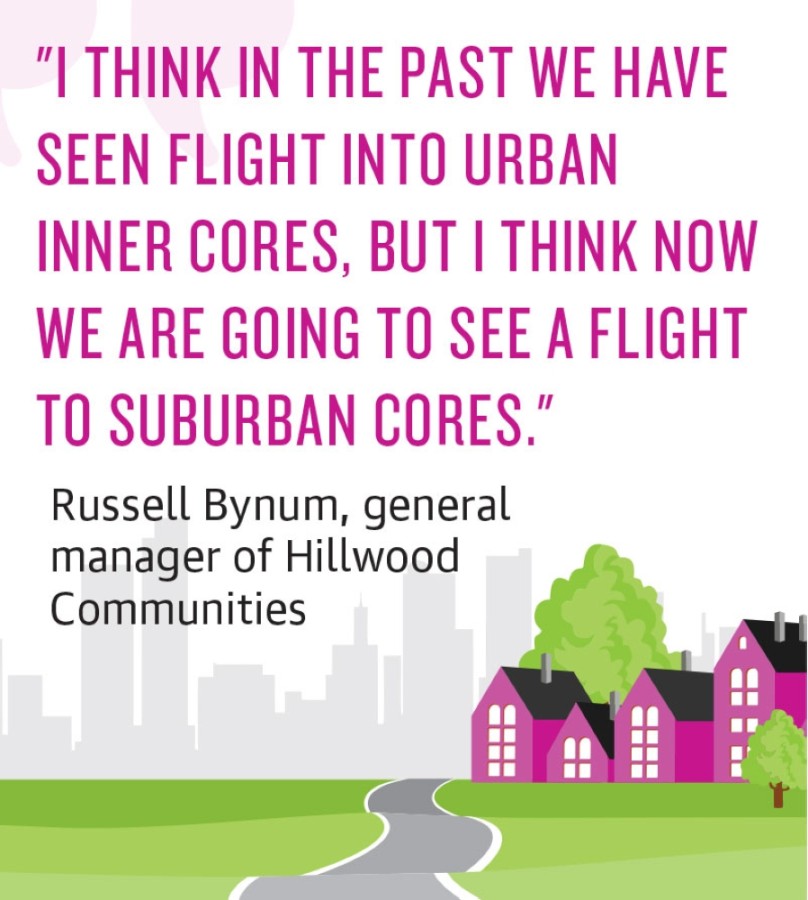 “People have found themselves at home way more than they thought they would be. People who never thought they were homeschooling are now homeschooling. There are so many unknowns,” Rogers said. “I think people are going to keep that in mind, thinking, ‘I need that extra space,' or, 'I need that pool or that playground.'’”

Bynum said he believes one of the results of the pandemic will be companies allowing more people to work from home. He predicts not having to worry about a commute will cause a rush to suburban areas, where homeowners can have larger homes with more community amenities.

“I think in the past, we have seen flight into urban inner cores, but I think now, we are going to see a flight to suburban cores, Bynum said. “People will be able to work from home, so location is a little less important. I think now, it is going to be important for master-planned communities to offer great community packages.”

Hunter Marrow and Nola Z. Valente contributed to this report.