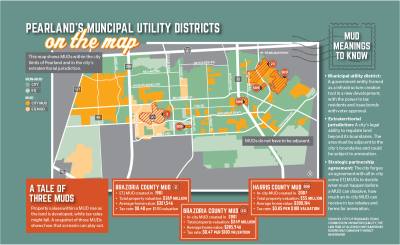 Special districts crafted to meet infrastructure needs for public utilities might be one of the hardest to understand taxing entities operating within Pearland’s boundaries and the surrounding land the city asserts authority over, officials said.

Municipal utility districts cover about one-fourth of the 77 square miles making up the city of Pearland and its extraterritorial jurisdiction, officials said. The ETJ is the land adjacent to the city’s borders that Pearland has the legal capability to regulate, officials said.

“Special-purpose districts can be a complicated part of local government because of the overlap in taxation, government authority and decision making,” said Joel Hardy, the grants-special projects administrator for the city.

In short, MUDs finance infrastructure for public utilities in new developments, but ideally, both MUDs and their taxes dissolve once they have served their purpose, officials said.

Residents living in MUDs can obtain information from officials with the districts that have pushed forward development in the city and its extraterritorial jurisdiction, city and MUD officials said.

What is a MUD?
A MUD is a government entity created to provide facilities for water, wastewater, drainage, parks and roads, but not all MUDs have all these powers, said Lynne Humphries, an attorney at Houston law firm Allen Boone Humphries Robinson.

“When we bought the home, we knew we had a MUD tax, but we just never understood what it is,” said Judy Reed, president of the South Hampton Homeowners Association and Pearland resident.

MUDs fall under the Texas Commission on Environmental Quality’s authority.

The TCEQ and the state Legislature can create MUDs, while the impetus to form a MUD typically comes from the developer, who has the option to seek a MUD’s creation. The TCEQ requires the developer to pre-finance the public infrastructure because it cannot sell bonds for it.

“They do not allow a district to sell ... tax-exempt bonds to pay for infrastructure until the growth has been proven,” Humphries said.

She said a city could build public utilities itself for undeveloped areas but generally does not, based on the belief taxpayers should not bear that cost.

An elected five-person board runs the MUD, Humphries said.

Board members do not receive a salary for their service, according to the TCEQ. However, they can choose to receive a per diem, or fees of office.

A MUD can use revenue from taxes it levies for the district’s utility infrastructure, to pay the developer back and to pay off bond debt, officials said. The tax revenues belong only to the MUD.

Humphries said rules mean the developer will not end up completely reimbursed. She compared MUD financing for infrastructure for public utilities to a 30-year mortgage to buy a home.

“When you buy your house, you’re not paying for the $150,000 or more of public infrastructure that serves your house,” she said. “You’re paying for it in a tax bill that you pay for as long as your bonds are outstanding.”

End of MUD tax
About 11 MUDs operate in Pearland’s city limits and six in the city’s ETJ, Pearland officials said. Their founding dates range from 1972 to last year.

Reed said the South Hampton Homeowners Association Board has been trying to find out when taxes from its district, Brazoria County MUD 19, will end.

“If we were attorneys, we’d probably understand it, but our homeowners are constantly asking us about it, and we don’t have an answer for them,” she said.

An in-city MUD can dissolve when its debt is paid off and its infrastructure is completely built, Hardy said.

An ETJ MUD and the city might forge a strategic partnership agreement, in which two entities form an alliance to pursue common goals without sacrificing their independence, officials said.

If the city has a strategic partnership agreement with an ETJ MUD, city council can approve the city absorbing some MUD debt, Hardy said. A three-year annexation plan is typically included in the agreement.

Without such an agreement, an ETJ MUD can dissolve after its debt is paid and infrastructure built, he said. Voluntary annexation could occur.

“Only three Brazoria County-Pearland MUDs have dissolved,” Hardy said in an email.

Also, homes inside MUDs tend to hold their values better, he said.

“I believe this is a way to get a better bang for our tax dollars. Sometimes it is worth paying higher taxes to have better communities,” Parks said.

Transparency, accessibility and MUDs
MUDs fall under transparency laws just as other governmental bodies to post meeting times and agendas, said Houston attorney Joe Larsen, a member of the Freedom of Information Foundation of Texas Board.

Larsen said nothing in the law prohibits that. He said he was concerned, however, about space and accessibility to public meetings held at law firms in Houston, he said.

Reed said she does not know when and where Brazoria County MUD 19, where she lives, meets. She said her attempts to get general information have been unsuccessful.

Senate Bill 239 in the Texas Legislature is Nelson’s answer to rumblings about accessibility.

Her bill would give residents’ opportunities for more access to MUD meetings and to obtain audio recordings of public hearings to consider tax rates for districts.

The Senate approved the bill in a 31-0 voice vote May 3. The bill was on a House calendar as of May 9.

Humphries said she is involved with MUDS that meet in many different places and the elected board of directors chooses the meeting place.

Sometimes, the MUD convenes in the district, she said.

She prefers the law firm because anything the board needs is at its fingertips.

In addition, the MUD avoids increased costs for an attorney to drive to the district, Prade said.

“We’ll have meetings in the district, and no one shows, and then we’re paying out extra,” she said.

She has not heard complaints from residents about meeting in Houston.

“But even if they couldn’t attend, they could submit anything in writing,” she said.

Humphries said MUDs must be audited by a third-party accounting firm. Those audits are filed with state and federal entities.

Parks said Shadow Creek MUDs have websites. He said he sees the future of MUDs as continuing to improve communities.

“This is the perfect partnership of the city, MUDs, and homeowners associations working together to better their community,” Parks said.
SHARE THIS STORY

The Pearland restaurant is the third location for the business.