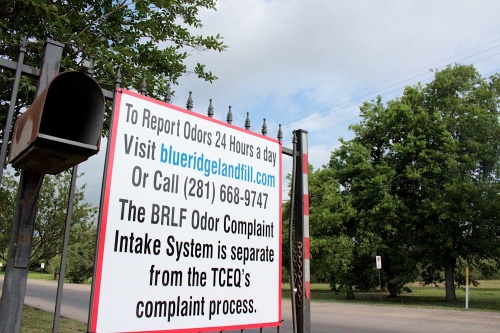 A sign posted at Blue Ridge Landfill lists a new hotline it created under its state-approved odor-control plan.

In response to repeated odor complaints in recent weeks surrounding the Blue Ridge Landfill, state Rep. Ed Thompson (R-Pearland) has called for a town hall to let residents hear directly from officials about steps being taken to enforce a state order to fix the problem.

The town hall is scheduled for 6 p.m. June 13 at Shadow Creek High School. The forum will be broadcast by MediaHeroes, a Pearland-based marketing agency, on its Facebook page.

"As the representative of a large portion of the residents affected by the odors from Blue Ridge Landfill, Rep. Thompson was happy to facilitate a time that residents could address their concerns with the implementation of BRL's odor control plan with the Texas Commission on Environmental Quality," said Staci Rives, chief of staff for Thompson.

A total of 149 complaints were filed against the landfill in the month of May, bringing the total complaint count to over 5,000, according to the city of Pearland's fact sheet on the landfill.

Officials with Republic Services Inc., which owns the landfill, were invited but will not be present, citing ongoing litigation, Rives said. Both the city of Pearland and residents of Shadow Creek have filed lawsuits against the landfill operator.

Under an odor control plan approved by TCEQ April 10, Republic Services must implement a range of corrective measures to reduce and prevent odors from affecting the surrounding area. The company says it has spent $7 million in about two years to improve its systems.

If Republic fails to correct the problem, it faces a $43,712 fine, an amount that Thompson has said may not be high enough to encourage compliance. The representative is chairing a state house committee that is looking at how to bolster TCEQ's enforcement of landfill regulations.
SHARE THIS STORY