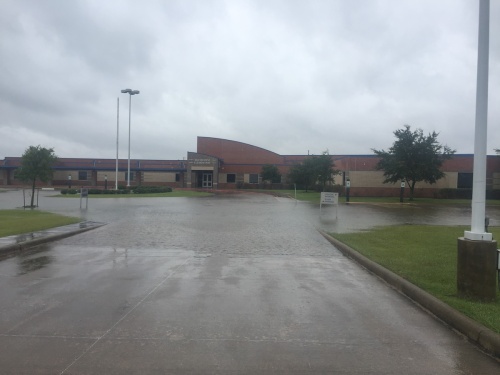 Flooding outside of Silvercrest Elementary, located at 3003 Southwyck Pkwy in Pearland.

Friendswood ISD staff will go back to work on Tuesday, Sept. 5. Students will resume class on Wednesday, Sept. 6.

In Alvin ISD, staff will go back to work on Tuesday, Sept. 5. However, students will not resume class until Wednesday, Sept. 6.

Pearland ISD has suffered minimal damage to a few schools, and no damage to most schools. Only Lawhon Elementary received some water in one hallway of the school.

“We were extremely fortunate that any water we did find is very manageable,” said Kim Hocott, executive director of communications for PISD.

The district will meet on Friday to discuss when to resume classes.

Pearland High School is currently being used as a Brazoria County shelter.

“We are happy to serve our community in this way,” Hocott said.

Friendswood ISD has also suffered minimal damages to the school. The district is busy making calls to check in on families before officials set a date for resuming classes next week, FISD director of communication Dayna Owen said.

Alvin ISD schools have sustained minor damages, including a few roof leaks. All damages are minor, and none of them will interfere with student safety, said Daniel Combs, assistant superintendent of professional learning and student and community engagement.

So far, the plan is for AISD schools to resume classes on Sept. 5, although that may be subject to change, Combs said.

Alvin, Friendswood and Pearland ISDs are all closed until Tuesday, Sept. 5, due to impassable roads caused by Hurricane Harvey, according to official statements.

Alvin Community College also announced its closure until Sept. 5, according to an official statement.

While the storm seems to be nearing its end, school districts are just beginning the damage assessment process to determine what, if any, damage has been done to facilities, said Daniel Combs, assistant superintendent of professional learning and student and community engagement at AISD.

“At this point, it’s so preliminary to give a definitive response. Many of our areas and our communities are impassable. … We look forward to the water receding so we can get a better look at what the campuses look like,” Combs said.

While Combs is unsure of the state AISD facilities, several families in the district have experienced damage from the storm. Much of Brazoria County was under a mandatory evacuation notice, which was issued on Sunday, Aug. 27, which affected families in Alvin ISD. “Our hearts go out to the families of our students and our staff that have been impacted by this tragedy and we look forward to helping them the best we can during this challenging time,” Combs said.

The storm has affected the Friendswood area as well, with parts of Friendswood receiving nearly 50 inches of rain, according to the National Weather Service.

The record for total rainfall from a tropical system has been BROKEN! Mary's Creek at Winding Road recorded 49.20", previous record is 48". pic.twitter.com/yCjuUOR8p3

So far, there is no damage to any Friendswood schools. Friendswood High School and Wedgewood Elementary are being used as emergency shelters, seeing nearly a combined 1,000 evacuees since Aug. 28, according to city estimates.

“The last few days have been such a difficult time for so many Friendswood families, but to see this community come together has been truly inspirational,” FISD Superintendent Thad Roher, who was appointed to head the district in June, said.

Pearland High School also opened as a shelter on Tuesday with limited availability. Pearland ISD was unavailable for comment as of press time.

A Brazoria County Shelter will be opening at Pearland High School at 12 p.m. today. There is limited space available. pic.twitter.com/HA9nKUoJno

Thank you for the response we've received from our generous community. Please see message from @COPearland. https://t.co/9N9nuDpvR9

FISD Board meeting has been postponed until further notice. Hoping to make-up within 72 hrs and will give a 2 hr notice.