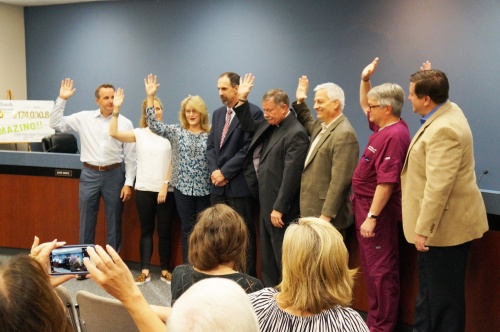 Friendswood ISD trustees voted unanimously to name Thad Roher as the lone finalist for Friendswood ISD superintendent during a special meeting on May 15.

The Friendswood ISD Board of Trustees approved the appointment of Thad Roher as the district's new superintendent during a special meeting on June 6.

As superintendent, Roher will also oversee the financial, personnel and operational management of the district. Roher was the deputy superintendent before his appointment as superintendent. He will succeed longtime superintendent Trish Hanks, who announced her retirement earlier this year after 15 years at the helm.

"I am excited to have completed the superintendent search process with Mr. Roher's contract signing.  During the entire interview process, Mr. Roher rose to the top with the best vision for our district and matched the characteristics the board desired in the next superintendent,” trustee Tony Hopkins said.

FISD trustees approved a qualifications and characteristics profile on March 29 that included eight traits of a “highly desirable” superintendent, according to the document. The profile was put together with staff, student parent and community input.

The eight traits included being a team builder, a leader of high moral standing who resides in the district, a visionary with success deploying technology in schools, an effective delegator, an attentive and motivational leader, experience in education and a track record of success, according to the profile.

“Given Mr. Roher’s background in our community, he understands the community’s focus on faith, family and education that began with our town’s founding in 1895 and he will continue to focus on continually improving our education system as its leader,” said Hopkins.

Roher was chosen out of 44 candidates after a “rigorous interview process,” trustee Pastor Ralph Hobratschk said. After a series of phone calls, the pool of 44 was narrowed down to six candidates, who were interviewed by trustees. Roher was selected as the lone finalist for the job on May 15. Per the 21-day waiting period, the school board could not offer Roher the contract prior to June 6.

“There were some very good candidates among those six, but it was clear that Thad was the leader,” said Hobratschk.  “I feel very confident that Thad is going to fall into a line of great leaders for the school district.”

Roher is a Friendswood High School graduate. He received his undergraduate degree in elementary education from Barclay College, a private Christian college in Kansas, in 1991 and his master’s degree in education administration from Fort Hays State University in 1995, according to the district.