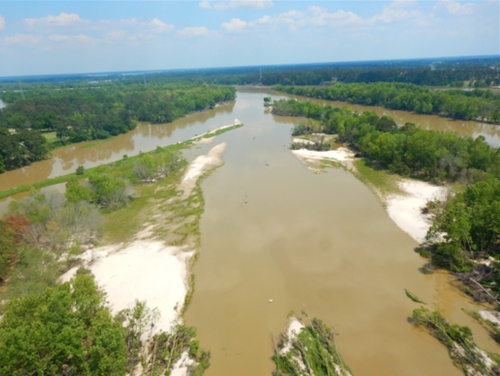 A contractor hired by the Army Corps of Engineers will begin dredging a portion of the West Fork of the San Jacinto River in August to remove sedimentation and debris deposited in the river during Hurricane Harvey.

The Corps hired the contractor after the Federal Emergency Management Agency tasked the Corps with removing 1.8 million cubic yards of debris from a 2-mile stretch of the West Fork of the San Jacinto River near West Lake Houston Parkway earlier this year.

Because this is an emergency project authorized by FEMA—unlike the Corps’ usual projects, which are funded by Congress—the dredging will only return the river to pre-Harvey conditions. This means cleaning up remaining debris—such as large trees—and dredging large sandbars created by the flooding last August.

The Corps awarded the $69.81 million contract for the project to Great Lakes Dredge and Dock in July. According to an Army Corps of Engineers press release that was posted July 19, the contractors have about nine months to complete the work.

“This is the beginning of the first phase of a very challenging project,” said Al Meyer, an administrative contracting officer for the Corps. “This project involves dredging and debris removal of 1.8 million cubic yards of sediment that has contributed to recent flooding in that area.”

After the dredging project is complete, the Corps is not responsible for consistent dredging to maintain the river. However, Harris County—along with other local jurisdictions—has submitted an application for federal funding to complete a study of the river and its watershed to identify flood mitigation strategies.

The strategy includes seasonally lowering Lake Conroe—which is located upstream from Lake Houston—by 1 foot from April 1-May 31, and by 2 feet from Aug. 1-Sept. 31. The measure also includes prereleasing water from Lake Houston prior to storms the National Weather Service predict will drop 3 inches of rain near the San Jacinto River within 48 hours.