Dredging on and around Lake Houston’s mouth bar, which is at the confluence of the West Fork of the San Jacinto River and the lake, will continue into 2021. Contractors were dredging the area north of the mouth bar in early January. (Courtesy city of Houston)

Local counties and cities will seek to tackle flood and drainage projects this year. The city of Humble will work on internal drainage, while the city of Houston and Harris County are close to purchasing land for a regional stormwater detention basin.

Additionally, with the 87th Texas Legislature set to continue through this summer, local lawmakers and leaders are solidifying their priorities for what should be funded by the state over the next biennium.

Jenna Armstrong, the president and CEO of Partnership Lake Houston, said the organization is advocating for flood resilience, pandemic relief and economic development to be priorities in the upcoming session.

“Flood resilience is still going to be a big piece,” she said. “Because we need things to happen upstream, too, that impact us.”

The city of Humble will begin several drainage projects this year, one of which is a $2.05 million project on Black’s Bayou in the Northshire subdivision. Humble Public Works Director Mark Arnold said the project, which will desilt and stabilize the channel, is set to begin August 2021 and be completed by February 2022.
RELATED STORIES

“When it starts to rain or if there’s a black cloud in the sky, [the Northshire residents] get panicky,” Humble Mayor Merle Aaron said.

Additionally, Harris County and the city of Houston approved an interlocal agreement in December to buy Woodridge Village—a roughly 268-acre property accused of causing flooding Kingwood neighborhoods twice in 2019. Officials want to buy the property for $14 million and make it a regional stormwater detention basin.Russ Poppe, executive director of the Harris County Flood Control District, said at Harris County Commissioners Court on Dec. 15 that the entities will close on the property in March. It will cost roughly $20 million to remediate the property. 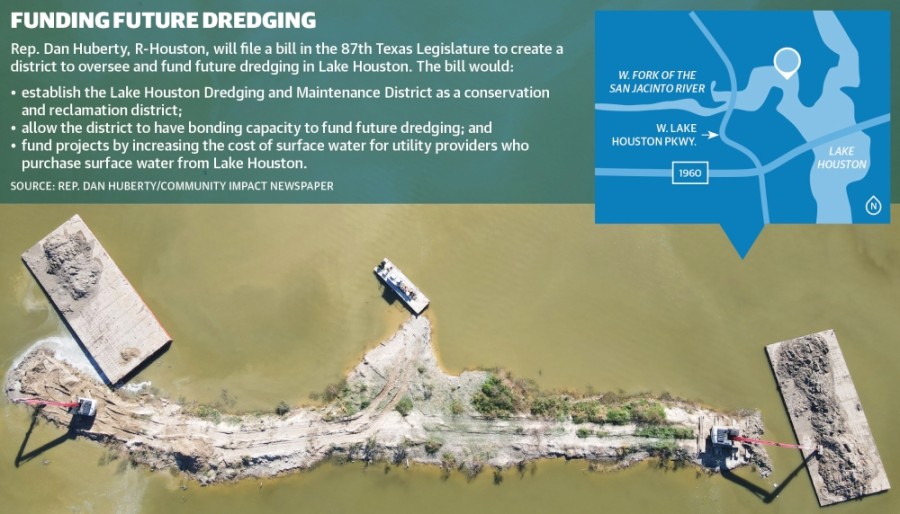 Meanwhile, state Rep. Dan Huberty, R-Houston, will file a bill in February to create a conservation and reclamation district to oversee and fund dredging in Lake Houston. Built-up sediment has been dredged from the lake and its tributaries since September 2018.

The Lake Houston Dredging and Maintenance District would have the power to take out bonds to fund projects, with the bonds being paid by charging a rate to utility providers who purchase surface water from Lake Houston.

Armstrong, who was nominated to the board, said the group will hire technical experts to determine regional solutions to flooding. The group must adopt a regional plan by January 2023.
Read the other top stories of 2021 from our print edition: Harris County's preliminary flood plain maps to be released in late 2021. Humble Mayor Merle Aaron announces retirement, will not seek re-election in May.
Lake Houston-Humble-Kingwood Annual Community Guide 2021 Jenna Armstrong Mark Arnold Dan Huberty Merle Aaron
SHARE THIS STORY