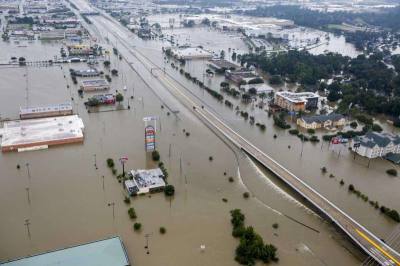 Local legislators and officials launched Recover Lake Houston—a campaign that lobbies for funding and awareness for projects that could reduce flooding in the Lake Houston area—in early December.

The "Plea for 3" campaign is based on remediation, reduction and representation after devastating flooding during Hurricane Harvey,  said Jenna Armstrong, CEO of the Lake Houston Area Chamber of Commerce.

"Forty-four percent of businesses in the Lake Houston area—we have 7,500 businesses, so nearly half of our businesses—sustained some type of damage," Armstrong said. "We didn't know what the number was, so we were amazed and shocked when we found that out."

Houston City Council Member Dave Martin said the sand deposits in the San Jacinto River may have been directly responsible for flooding in the Fosters Mill subdivision in Kingwood, which does not typically flood.

“If you look at the sand bars in the middle of the river that just formed over the last few years, we’ve lost a tremendous amount of water capacity—the ability to maintain water,” Martin said.

In 2011, Huberty helped pass House Bill 571 to address concerns about what was then unregulated sand mining along the San Jacinto River. The legislation required dirt, sand and rock quarry operations across the state to register with the Texas Commission on Environmental Quality.

Huberty said he believes the restrictions need to be better enforced.

The campaign also calls on the San Jacinto River Authority to reduce its pooling level by three feet, Martin said. The SJRA maintains water in the Lake Conroe dam at 201 feet. Lowering the pooling level will allow three additional feet of capacity before a water release is necessary, Martin said.

Martin, whose district includes Kingwood and portions of Summerwood, said this is one solution that could have an effect before rains return this spring.

However, SJRA officials said lowering pooling levels will cause an issue long-term as the region’s population continues to grow and more residents across the Greater Houston area use Lake Conroe as a drinking source.

Houston addressed other concerns of Lake Houston area residents in a Q&A with Community Impact Newspaper.

He said he believes 3 feet of capacity would not make a significant difference during large rain events.

“Here’s the problem, in Harvey we passed through the gates over 15 feet of lake level—that’s how much water came through Lake Conroe,” Houston said. “So if we had started that event three feet lower it really doesn’t change—it would delay the release of water a little bit. I don’t know by how much, but you’ve still got 12 feet of water that you’ve got to deal with and pass through the dam. You’re still going to have a large release of water.”

In addition, The Plea for 3 advocates are seeking to have three interim SJRA board members who represent the downstream communities, Armstrong said. Members of the SJRA board are appointed by the governor.

Although no board members reside in Kingwood or near Lake Houston, Houston said two members of the SJRA board live downstream from Lake Conroe—in Seabrook and Baytown.

"We're asking for the three interim board positions on the SJRA to serve until we get a legislative—some type of bill passed that addresses this," Armstrong said.

Houston said the SJRA considers the interests of residents who live downstream during water releases.

“I don’t think just because you don’t live in an area that doesn’t mean you don’t care about the area and try to represent everyone’s interests,” Houston said. “But ultimately that’s not my decision, that’s up to the Legislature.”
SHARE THIS STORY

Texas Q uses premium ingredients with proprietary sauces, rubs and spices, and has been featured on The Food Network.