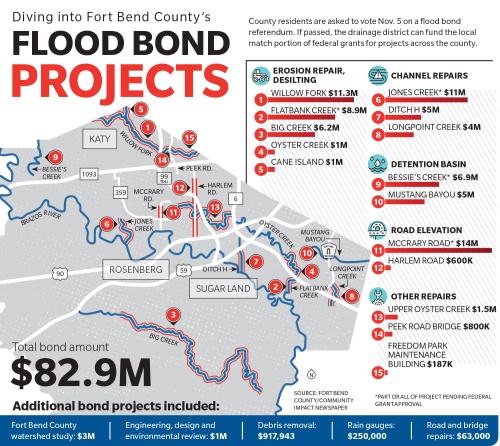 For the first time in about 70 years, Fort Bend County residents will vote Nov. 5 on an $82.9 million bond referendum to fund up to 25 flood mitigation and drainage projects, including several in the Katy area.

Precinct 3 County Commissioner Andy Meyers said he is cautiously optimistic that the bond will pass. But if voters do not approve the bond, the county will deal with that situation as needed, he said.

The county selected most of the proposed projects based on federal grants, which often pay for the majority of a project’s cost so long as the local entity promises to fund the remainder of the bill, Vogler said.

“When it comes to a flood bond, it is based on our need and based on our projects, and so nothing [is] decided overnight,” he said.

The grants and bond money to pay for the local match are needed because the FBCDD is spending down its fund balance on projects, Vogler said.

According to Fort Bend County’s latest Hurricane Harvey County Damage Summary, the 2017 storm cost about $80 million in damages. The county has spent about $18 million so far to supply the local match portion of various federal grants, Sturdivant said.

“We’re not in bad standing, it’s just we’re getting into a gray area,” Vogler said about the FBCDD. “So what the [commissioners] want to do is this [bond]: to borrow this money to facilitate these projects, and we can pay it over time.”

Between the city of Katy and the Grand Parkway, the county is repairing erosion on Willow Fork, Vogler said. Crews finished desilting the channel in mid-October between the Grand Parkway and inside the Barker Reservoir, he added.

About $1 million of the proposed bond will go toward Cane Island Branch. Phase 1 of erosion repairs started this summer, and design work started for Phase 2, Vogler said.

About $800,000 of the bond monies would go toward repairing Peek Road bridges crossing over Willow Fork, and about $185,000 will help the county repair a maintenance building at Freedom Park, located at 18050 Westheimer Parkway, Houston, and damaged by floodwaters.

Countywide projects proposed in the bond include installing rain gauges in cooperation with the Harris County Flood Control District, Vogler said. These gauges would provide real-time data to residents about rainfall incidents online.

Additionally, about $3 million of the bond referendum is for the county’s watershed study, a project that began in mid-2018 and is expected to be completed at the end of 2020, Vogler said.

The study is examining the county’s streams, creeks, bayous and infrastructure, and it will provide a cost estimate of various projects the county can pursue to improve the county’s flood mitigation and drainage.

This decision to change the referendum’s focus from facilities to flood was prompted by discussions with residents, homeowners associations and local officials, Commissioners Vincent Morales of Precinct 1 and Ken DeMerchant of Precinct 4 said when announcing the switch  Aug. 1.

When respondents were asked to select up to three bond referendums they would support, 81% supported flood mitigation, 54% supported mobility, 30% supported a facilities bond, and 11% said they would not support any.

Dennis Silva, a city of Katy resident, said he understood the county’s needs for drainage projects and he supported it.

“We need to be more forward thinking, and that’s what this bond does: Be more proactive instead of reactive,” he said.

If the November bond referendum fails, the county will likely continue with the projects but at a slower pace, Sturdivant said. The projects will take longer to complete, and construction costs will increase.

He said the county will likely place a mobility bond referendum on the November 2020 ballot. And if the watershed study is completed by mid-2020, then the county may return to voters for additional bond money to fund more drainage projects.

Sturdivant said the county can issue up to $450 million in debt over the next five years without a tax rate increase.

The facilities bond has been put on hold. However, the commissioners did approve a resolution Sept. 24 to advance $1.2 million to begin designing a new emergency operations center, which was part of the proposed facilities bond referendum proposed in the summer. The existing emergency management center, located at 307 Fort St., Richmond, is in need of repairs, officials have said.

“The commissioners ... will have an action plan,” Sturdivant said. “If something happens—a disaster or a hurricane—and we’re not prepared, then we’re doing the public a disservice.”
SHARE THIS STORY