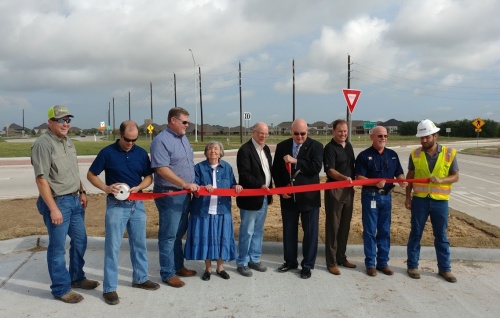 Fort Bend County officials and members of the construction company who built the roundabout prepare to cut the ribbon which officially opened the roundabout.

Chris Debaillon, Fort Bend County’s Traffic Engineer, said the roundabout is a pilot for Fort Bend officials to see how well they can work to keep traffic flowing safely and that the county is considering other traffic circles for future development.

Hebert and Andy Meyers, commissioner of Fort Bend County’s Precinct 3, said the traffic circle would improve safety in the area because roundabouts force drivers to slow down.

“It opens [Spring Green Boulevard] all the way up to I-10 [via FM 1463] and with the opening of Cane Island Parkway, we now have two access points to I-10 [from the south and west side of Katy],” Meyers said.