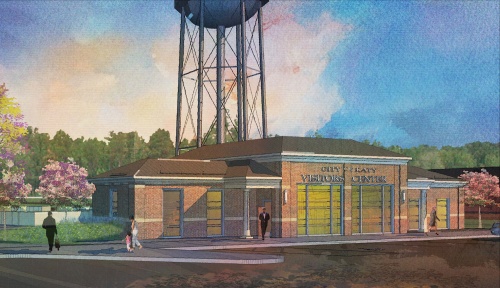 The new Katy Visitors Center will be housed in the Katy City Annex, which will be refurbished.

The city of Katy awarded a contract for the construction of the Katy Civic Center and Visitors Center buildings as part of the new Katy Downtown Plaza at the Dec. 10 Katy City Council meeting.

The Katy Civic Center will be installed in the old Katy City Hall Building on Avenue C, while the Visitors Center will be created by refurbishing the Katy City Annex on Second Street in downtown Katy, according to city documents.

The $3 million bond package that is helping to pay for the downtown improvements was approved by Katy voters in 2000, but the project was slow to get started, City Council Member Chris Harris said. A group of local business owners and residents, including former Mayor Doyle Calendar, had been working on plans for the Katy Downtown Plaza since 2014, he said.

“We’re going to be able to do it, finally,” Harris said. “I am ecstatic and proud that we’re going to have our downtown district up and going after 18 years of discussion.”
SHARE THIS STORY