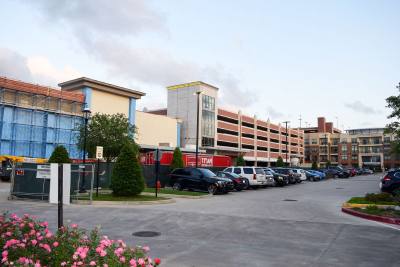 Alamo Drafthouse Cinema will open this summer and is the third theater coming to Katy. Xscape Theaters will open a second Texas location in the Katy/Fulshear area by October 2018. The Indiana-based movie theater chain opened its first Texas location at the border of Magnolia, The Woodlands and Conroe this year.

As part of a Walmart anchored project developed by Lovett Commercial, the new theater is under construction on a 7-acre tract of land located at The Crossing at the intersection of FM 1093 and FM 1463.

The 52,000 square-foot theater will hold up to 1,530 attendees and features leather reclining seating, twelve screens and a concession area, according to a press release from Newcor Commercial Real Estate.

A second theater includes Trammell Crow Company’s Flix Brewhouse, a dine-in cinema and microbrewery, is expected to open by summer 2019 off the Grand Parkway and West Airport Boulevard.

The cinema-brewery is located across from two master-planned communities: Johnson Development Corp.’s Harvest Green and Aliana.

“Both Harvest Green and Aliana are widely recognized as two of the leading and fastest-growing master-planned communities in the country,” a press release from Trammel Crow Company stated. “In addition to the explosive housing growth in the area, the intersection has also become one of the hottest retail locations in Houston.”

At 38,750 square feet, Flix Brewhouse will offer nine auditoriums, luxury seating, sliding tabletops, in-theater service, adult beverages that include beers brewed on-site, a brewpub restaurant and a patio, according to the release. The theater will also offer special events like brewmaster dinners, brewing and tasting seminars and other activities.

The third theater coming to the Katy area includes the Alamo Drafthouse Cinema at LaCenterra. Construction on the theater is progressing with the new location expected to open this summer, said Dustin McMillian, marketing and brand manager for Alamo Drafthouse Cinemas Houston. The eight-auditorium theater will employ a team of 175 and is expected to open this summer.

Alamo Drafthouse broke ground on construction for the new theater May 26 of last year, according to a press release on their website. The new site is one of 11 locations currently in development, including a new Sugar Land location. The dine-in theater chain already has 30 locations nationwide.

Each auditorium at the new facility will feature recliner seating and all seating will be far enough from the screen to ensure that all moviegoers have a comfortable view, McMillian said. Like all Alamo Drafthouse locations, the theaters will have full dine-in service so that patrons can eat during movies.

The theater will have an adjacent bar and lounge area with outdoor patio seating with a collection of craft beers on tap. The bar will feature drinks designed by mixologist and Alamo Drafthouse Beverage Director Bill Norris, according to McMillian.

Alamo Drafthouse locations offer a variety of pub grub on their menus, including gluten free options. Patrons order using pens and slips of paper in the theater and their food is served to them during the film. Alcoholic beverages are available to those 21 and up. According to the theater’s website, no ads are played prior to movies. Instead, the theater provides nostalgic reals of clips related to the movie patrons have come to see.

POAG Shopping Centers Marketing Director, Diana Elkins, said via email that POAG is excited to have Alamo Drafthouse join the shopping center. LaCenterra currently has more than 80 tenants according to its website. The cinema also brings with it a six-story parking garage, Elkins said, making shopping more convenient.

“Their signature, one-of-a-kind movie experience will make them a great addition to the existing dining and shopping options in the center,” Elkins said.
SHARE THIS STORY

Plans to create a Katy ISD virtual high school are moving forward after a vote from district leaders on May 17, pending funding from the state.

La Borra Del Café, a Mexican coffee chain, is expected to open in Villagio Town Center in late 2021 or early 2022.