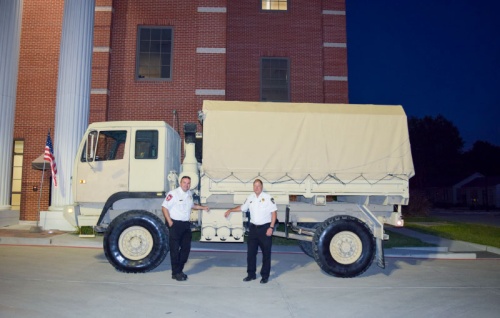 The U.S. Department of Defense’s 1033 program allows state, local and tribal law enforcement to acquire surplus military equipment at a reduced cost. Katy area agencies have used the program for purchases that were either denied by their respective governing bodies or were inexpensive enough that the requesting agencies already had the funds available.

In the case of the latter, purchasing equipment directly is faster than seeking council or commissioners’ approval. One example was a Light Medium Tactical Vehicle with high-water capabilities, which KFD bought for about $5,000 on Sept. 11.

“We’re still working on the budget for next year, but I do know we’re working on putting in a dollar amount aside for vehicles like that,” he said.

Local agencies have used other programs to purchase equipment as well.

In August before the storm, KFD received a $2.18 million Staffing for Adequate Fire and Emergency Response grant from the Federal Emergency Management Agency to hire 16 firefighters and build a second fire station, according to Wilson and Katy Mayor Chuck Brawner.

“The equipment proved to be invaluable to not only our community but neighboring communities as well,” he said. “We were able to help rescue hundreds of residents over the catastrophic multiday event.”

After the storm, Harris County ESD No. 48 also accepted six boats from the Texas Department of Public Safety, according to  Lt. Simon VanDyk, the district’s public information officer. The district distributed the boats to agencies including WFD and KFD.

“Basically, we just called our neighboring departments and said, ‘Hey, DPS just gave us six boats that they’re not going to take home. Do you need any of these?’” he said.

WFD has a 12-foot boat with a 25-horsepower motor, but the department would like another high-water vehicle and a boat with a larger motor for flooding, Chief Mark Palmer said.