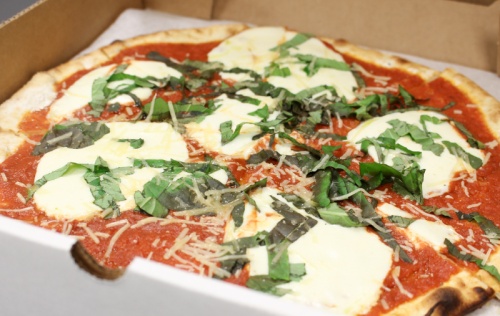 The Margherita Pizza ($9.95) is the restaurantu2019s top-selling pizza.

After restaurant owner Colburn McClelland opened Willy Burger off Highway Boulevard—his first restaurant concept in Katy—he said he realized something: The Greater Katy area did not have the quality pizza he was looking for.

Crown Pizza’s opening on June 20 marked McClelland’s fourth brick-and-mortar restaurant. He said pizza is all about three things: the oven, dough and tomatoes.

The restaurant’s oven, built in Naples, Italy, weighs 8,000 pounds and burns at 900 degrees. They also import 00 Caputo flour—which is the highest quality flour one can buy, according to McClelland—San Marzano tomatoes, cheeses and breads from across the world.

McClelland said the pizzeria’s claims to fames are the quality of its pizza and the variety of options offered. He specifically recognized the BBQ Yard Bird Pizza, Chee-burger Chee-burger Pizza, Creole pizza and most importantly the Margherita pizza.

“People who know pizza know you judge a pizzeria by the quality of their margherita pie because that’s a traditional pizza over in Italy,” McClelland said. “We’ve had many folks come in who say if they close their eyes and just tasted the pizza they could not tell whether they were sitting in Italy or here. That’s a real compliment to me.”

McClelland said he does not expect to expand Crown Pizza soon. He said Crown Pizza’s greatness, both in quality of food and quality of staff, is what makes his restaurant successful.

“Everybody’s pulling the plow in the same direction. We’re all on the same team; we know exactly where we’re headed and why we’re headed that way,” McClelland said. “We don’t try to be everything to everybody. We have a very narrow and deep menu, and I have found that by keeping your menu limited but being great at what you do, people will come for that greatness.”