Name proposed for new high school, 8 police officers may be hired: 3 things to know from the Aug. 19 Katy ISD board meeting 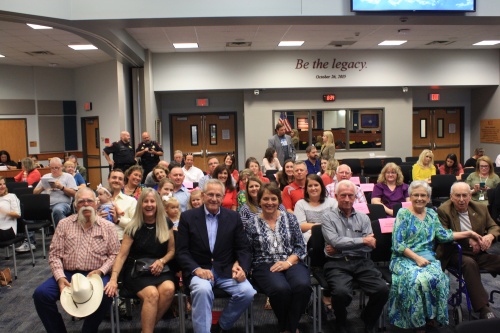 About 40 members of the Jordan family attended the Katy ISD board meeting Aug. 19, in which the district announced that the proposed name of the new high school will be Jordan High School.

About 40 members of the Jordan family attended the Katy ISD Aug. 19 board meeting to celebrate the announcement of the name of district’s newest high school.

The proposed name for High School No. 9, which will open for the 2020-21 school year at 27500 Fulshear Bend Drive, Fulshear, is Jordan High School, Superintendent Ken Gregorski said.

Five generations of the Jordan family have been involved in the local community since 1913 when Henry Elmer “Hank” Jordan and his wife, Olga, moved from Kansas to a farm north of the city of Katy, according to a biography provided by the district.

Hank was a board trustee between 1932-1939, according to the biography. He was instrumental in helping the district start a music program, build the district’s first gym and obtain the Katy Future Farmers of America charter in 1932. Many of Hank’s descendants were and still are highly involved in the local chapter of FFA.

Hank Jordan’s son Melvin, at age 93, is believed to be the one of the last living students from the original Katy school, according to the bio. His daughters taught special education and speech at KISD. Eleven Jordan family members will teach at KISD in the 2019-20 school year.

A public forum to discuss the proposed name will be held 6 p.m. Aug. 21 at the Education Support Complex Board Room, 6301 S. Stadium Lane, Katy.

Hear what else was discussed at the Aug. 19 KISD board of trustees work-study meeting:

Cost for these additional officers was not discussed nor provided in the meeting’s agenda. According to the Texas Education Agency, average base pay for an auxiliary safety/security staff member at KISD for the 2018-19 school year was $36,958.

The eight additional officers will increase visibility and security at elementary and junior high schools, according to Schuss’ presentation. They will provide additional campus support during peak times, participate in campus events and programs and help educate students about bullying, alcohol and drugs.

Two district administration leaders presented the results of a parent communication engagement study that began in 2018 after the district’s 2017 effort to involve the community more in districtgoals.

Dawn Carlson-Scruggs, KISD assistant superintendent for school leadership and support, and KISD Chief Communications Officer Andrea Grooms said 76% of parents consider themselves informed about opportunities for engagement based on a parent survey with over 5,000 participants.

The study, which also included at least four focus groups with parents, found the main reasons parents may not participate in activities at their children’s schools were:

The two most valuable engagement activities at the elementary and secondary school levels for parents were meet-the-teacher night and parent-teacher conferences, the study found.

To encourage more parents to participate in school activities, principals at district schools have shared their best practices with each other and have been charged with creating plans to increase engagement at their schools, Carlson-Scruggs and Grooms said.

During the school year, the principals must reflect and provide updates on their engagement efforts to learn what strategies and new were successful or not, they said.

“The main purpose is always increasing our communication between school and home,” Carlson-Scruggs said.
SHARE THIS STORY