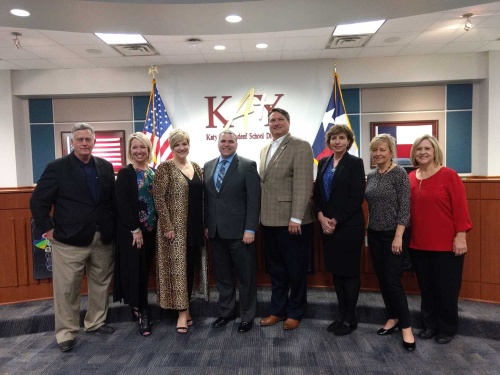 Ken Gregorski (fourth from left) stands with Katy ISD board members after they voted 7-0 on Jan. 14 to approve his contract as superintendent.

In a 7-0 vote, the Katy ISD board of trustees approved the contract to hire acting Superintendent Ken Gregorski as the new permanent superintendent of the district at the Jan. 14 work-study meeting.

Gregorski's annual base salary will be $300,000, according to the three-year contract signed Jan. 14 and made publicly available Jan. 15. This salary can increase beginning July 1, 2020, to either a percentage agreed upon by the board or the maximum percentage raise given to the district's teachers. He will also receive benefits along with a $1,000 per month in automobile allowance and $100 in a mobile telephone allowance.

Gregorski was named the lone candidate for the position in December. He replaces former superintendent Lance Hindt, whose last day was Jan. 1.

“As superintendent it is my mission to provide the leadership and direction for this district, and that is to ensure our educational excellence,” he said after the vote.

He said his priorities include offering personalized learning experiences for students, ensuring assessments add value to teaching and learning in the classroom as well as hiring quality teachers through competitive pay structures and better recruitment and retainment strategies.

“Our mission talks about unparalleled learning experiences, but what does that mean?” he asked. “… That means focusing upon the good work that is happening in our classrooms every day, and it means supporting our teachers with meaningful professional development. It means providing safe schools for our kids. It means supporting those kids in their well-being.”

Also at the meeting, the board proposed naming Junior High No. 16—which will open for the 2019-20 school year—after former board member Joe Adams. He served KISD for from 1989 until 2016, when he was defeated by board member George Scott. Adams held every position on the board at least once and served as president for four different terms.

A public forum regarding the proposed name will be held at 6 p.m. on Jan. 16 at the Education Support Complex Board Room, 6301 S. Stadium Lane, Katy, according to a KISD press release. The name will be voted on at the next board meeting, Jan. 21.

A committee will also be formed to name Elementary School No. 42 should the board approve the item Jan. 21.