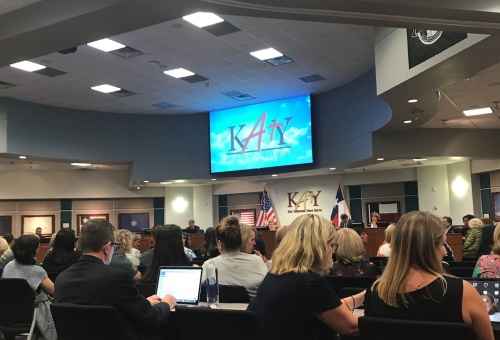 KISD officials said from the July amended budget to the final amended budget, the general operating fund saw a decrease of $4.4 million in revenues related to estimated property values. Another significant change was the decision to move an insurance payment related to Hurricane Harvey out of revenue and into other sources, which resulted in a decreased fund balance of $442,000, according to KISD officials.

“Changes result in a decreased fund balance of $2.8 million, which includes one-time funding of $730,000 for kitchen renovations at Mayde Creek High School,” Sharri Butterfield, KISD’s director of budget and treasury, told trustees Aug. 20. “It’s been difficult to project trends on this fund due to distortions from Harvey.”

One construction-related amendment includes $1.6 million for additional security fencing at 42 campuses trustees approved at the July 23 board meeting. Officials said the fencing will be completed on all elementary campuses by December, but other campuses may not receive fencing until the end of 2019.

KISD Chief Financial Officer Chris Smith told trustees the 2017-18 budget expenditures could change if federal grants the district has applied for are approved. Smith said a restart grant for $4.4 million and another emergency impact grant for an estimated $3 million could lower expenses.

“That will be monies that we can use to apply to expenditures in the 17-18 school year,” Smith said.

Trustees also approved the district's 2018-2019 budget. In an Aug. 20 presentation, Smith told trustees the district has seen 2.9 percent enrollment growth and a 2.4 percent increase in its tax base.

Local revenue funds 64 percent of the new budget, with 34 percent coming from state revenue and 2 percent from federal revenue. The new budget's total fund balance as of Aug. 31, 2019, is also projected at $267 million.

In other business Monday, trustees unanimously approved a $700,000 annual contract with Nike and BSN for athletic apparel for the next five years.

According to district documents, the contract includes all varsity athletic wear, including coaches’ apparel and footwear. KIDS considered proposals from four vendors before the trustees' vote: BSN/Nike, BSN/Under Armour, Adidas and Kollege Town Sports. BSN is the distributor for the uniforms.

The five-year contract includes one five-year extension option between the KISD Athletics Department and Nike. The contract will begin Sept. 1. Aside from discounted uniforms, the contract also includes other incentives for the athletics department such as two $2,500 student scholarships.

“This agreement will provide all of our sports the opportunity to take advantage of the overall success of our athletic programs,” KISD Athletic Department Executive Director Deborah Decker told trustees Aug. 20.  “The fact that we are able to spread this to all of our programs really is the driving force behind all of this.”

KISD Vice President Bill Lacy said he was surprised the district did not already have a districtwide contract in place.

“I am thrilled that we are able to have one central process in place rather than trying to spread it out and have each individual school have their own individual contract,” Lacy said at the Aug. 20 meeting.

On Monday, Decker clarified that all uniforms will not be replaced automatically with the approval of the contract, referencing a “uniform cycle” that must pass before any uniforms are replaced.

“We will not go and order all brand-new uniforms after Sept. 1. We will continue to follow our normal uniform cycle,” Decker said. “We will not all of a sudden throw [current sports teams’ uniforms] out of the window. There will be transitional time throughout that process.”

“This is a special thing,” Decker said. “I think you will continue to see more and more school districts going this route, but we are happy that Nike and BSN stepped up. … It’s actually about a $330,000 benefit to the district.”

Trustees will meet again 6:30 p.m. on Sept. 17 at the Education Support Complex in downtown Katy.