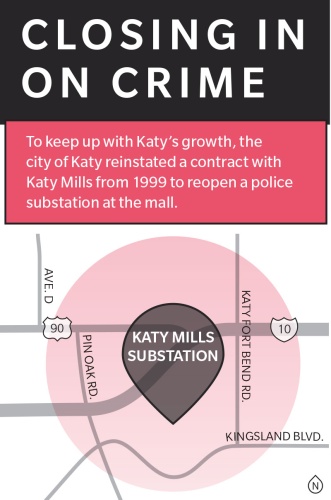 A police substation will reopen at Katy Mills after closing in 2011, former Mayor Chuck Brawner said.

Simon representatives confirmed the space for the substation is ready and they are working with the city of Katy on an official opening date.

“We’re staying ahead of the game,” Brawner said. “The crime is very close to us on the outside areas of Katy, and I just want the visibility around the mall and around those areas as well as the response times to be lower for our officers if they get called.”

The city of Katy partnered with Katy Mills owner Simon Properties, which provided the space for the new substation and covered retrofitting costs, such as painting and reflooring, Brawner said.

The new substation will be approximately 2,000 square feet, making it larger than the first one, Katy Mills General Manager James Ross said. It will be fully equipped with an office area, workstations, detention space and access to patrol vehicles. It will also have direct access to the outdoor parking lots, Brawner said.

During a discussion for the urgent need to add four police officers to the Katy Police Department at the April 22 Katy City Council meeting, Katy Police Chief Noe Diaz said even seven to 10 cops on a given shift are sometimes not enough for the influx of 6,000 to 7,000 people traveling to Katy Mills daily.

“In the next couple of years, Katy will become a college town with 8,000 students at University of Houston and 7,000 at Houston Community College,” he said. “They’re all going to come to … the mall during lunch.”

Initially, there will be two investigators and three to four officers reporting for duty at the substation. They will be responsible for patrolling inside the mall, the surrounding parking lots, the Walmart and nearby hotels.

“The city of Katy is booming,” Ross said. “It is undergoing enormous developments with the Katy Boardwalk District, new businesses and residencies. The Katy Police Department was in search of a centralized hub where the police force could quickly access all areas of the community with ease, and this was the perfect location.”

Fort Bend County will also build a police substation at the northwest corner of FM 1093 and FM 1463 in Fulshear.

Brawner said false information about incidents in and around Katy Mills was distributed through social media in December 2018, and after reviewing the calls for service made to Katy Police Department, he concluded there was no evidence of many of the robbery allegations made online, which compromised the perception of safety at the mall.

“We have a perception problem with people believing that the mall is not a safe space,” Council Member Frank Carroll said at the April 22 meeting. “We’ve seen a drop off in revenue from the mall. The mall is the economic engine of our city, and that transmission needs to be fixed.”

He added the mall does a great job at security, and Simon Properties’ efforts should be matched by the city to protect Katy Mills, Typhoon Texas and Katy Boardwalk District, which is expected to open by mid-2021.

“This is just going to make it a lot more efficient for us,” Brawner said. “We’re growing, so we want people to feel safe.”