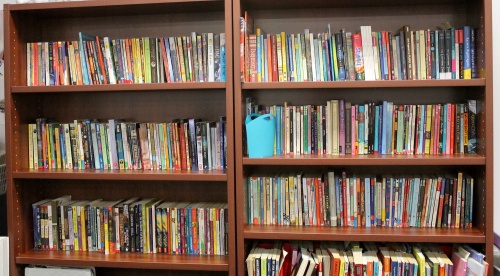 Katy ISD has grabbed national headlines for its decision to remove a book from campus libraries after a parent complained to the board of trustees.

“The Hate U Give,” a young adult novel by Angie Thomas published this year, was taken out of school libraries and is under review by the district. The move was prompted after parent Anthony Downs told the KISD board of trustees Nov. 6 that his junior high-schooler checked out the book at school and brought it to his attention, unsure of whether he should read it.

“I read 13 pages and was very appalled,” Downs said, before reading a passage containing profanity and descriptions of drug use by teens. “We need to clean up our books before this becomes our destiny.”

According to KISD legal policy—which is based on state, federal statutes as well as judicial precedent—a Texas school district may not remove library materials “for the purpose of denying students access to ideas with which the district disagrees. A district may remove materials because they are pervasively vulgar or based solely upon the educational suitability of the books in question,” the policy states.

District spokesperson Maria DiPetta said the book was removed solely for its “pervasive vulgarity.” She stressed that the book has not been banned and that students may still bring a copy to school or even write reports on it.

According to the author’s website, “The Hate U Give” centers around 16-year-old Starr Carter who witnesses a police officer shooting her unarmed best friend that may be a drug dealer. The story describes how she navigates the after effects as well as living in a poverty-stricken community while attending prep school in a wealthy neighborhood.

Thomas told Teen Vogue in a March interview that, with the book, she also wanted to touch on the Black Lives Matter movement and create a protagonist that reflects modern-day experiences of African-American children.

DiPetta was not sure exactly when the novel was removed from district libraries but said it was likely one week after the Nov. 6 board meeting, at which point, a review committee was formed to assess the book.

A University of Texas student from Katy tweeted about the matter Nov. 17. Nearly two weeks later, the book's author retweeted the post and shared her disapproval of KISD’s decision.

“I’m saddened to hear that a school district in Texas banned #TheHateUGive, but I’m also empowered - you’re basically telling the kids of the Garden Heights [the main character’s neighborhood] of the world that their stories shouldn’t be told,” Thomas tweeted Nov. 30. “Well, I’m going to tell them even louder. Thanks for igniting the fire.”

I'm saddened to hear that a school district in Texas banned #TheHateUGive, but I'm also empowered - you're basically telling the kids of the Garden Heights of the world that their stories shouldn't be told. Well, I'm going to tell them even louder. Thanks for igniting the fire.

— I Don't Cast Films Or Know When Trailers Will Drop (@angiecthomas) December 1, 2017

Thomas also tweeted a link to a Change.com petition started by a Katy-area teen Dec. 5 to get the book put back into KISD libraries.

I swear, teens give me hope for the future. So many thanks to all of the teens in Katy ISD who are speaking up and speaking out for #TheHateUGive. You’re true star(r)s ❤️ https://t.co/kuBXq7RxH9

— I Don't Cast Films Or Know When Trailers Will Drop (@angiecthomas) December 6, 2017

The petition, addressed to Hindt, had more than 860 signatures as of 8 p.m. Wednesday.

“It can bring about unity and understanding among the different races in your middle and high schools,” petition author Ny'shira Lundy said. “By placing the book back on the shelf it also gives the children a choice.”

National coverage of the matter prompted Superintendent Lance Hindt to issue a statement in response:

That same policy also states that any parent can request a review of a district instructional material on the basis of “appropriateness.” But the National Coalition Against Censorship, which has already contacted KISD to offer guidance in its review process, challenged Hindt’s statement and said the personal beliefs of parents and community members must not infringe on the education of all students.

“The Hate U Give” debuted at the top of The New York Times’s Young Adult best-seller list and a movie adaptation is in production. Amandla Stenberg, Anthony Mackie, Regina Hall, Issa Rae and Common are among the cast, according to the Internet Movie Database.

The novel is now under review by a committee of district community members, including teachers, principals, librarians and parents. DiPetta said she was unsure whether students are invited to participate as well.

The last time KISD reviewed a book was for Jeff Kinney’s “Diary of a Wimpy Kid,” which was temporarily removed after a parent complained about the novel’s themes on bullying. DiPetta said that review process lasted approximately a month.

DiPetta said that although students may not currently check out the book from district libraries, they can still bring it to school from elsewhere. But anyone hoping to get one from Harris or Fort Bend county libraries will have to wait: all available copies were checked out by Wednesday evening with upwards of 24 people on waiting lists.