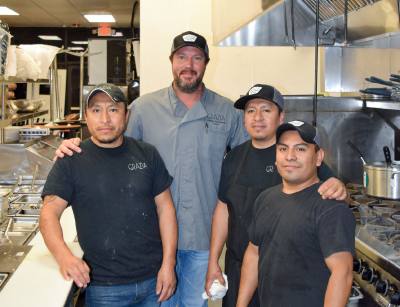 Hembree (second from left) and chef Juan Garcia (left) pose with their kitchen staff ahead of the April 19 soft opening. Adrian Hembree wants to bring Katy-area residents together to dine, share a laugh and have fun at his new Grazia Italian Kitchen location in Villagio Town Center.

The new restaurant is Hembree’s third location for Grazia. He opened the first location in 2014 in Pearland. A year and a half later, he opened his second location in Clear Lake and had a soft opening for the new Katy location April 19.

The restaurant specializes in Italian fare, but Hembree has realized over the last few years that his food inspirations are taking him to a sort of Texas-inspired Italian menu. A little over two years ago he started smoking meats for a variety of dishes, beginning with a boneless beef short rib with a brown sugar rub served over pancetta to give it an Italian flair with Texas inspiration.

“The Italian gives us a lot of flavor with the garlic and onions and tomatoes, so it’s good in flavor,” Hembree said.

Hembree said he has worked in Italian restaurants and in the food industry since he was in his early 20s. He later sold restaurant supplies for companies such as Costco and Kraft Foods, and he learned of the quality of the ingredients that should be used in restaurants.

Using that knowledge to focus on just the right ingredients is what gives the restaurant an edge, Hembree said. While most of his sources are local to the area, he said buying ingredients is not about geography; it is about the quality of the product. He prefers Texas Gulf shrimp for the saltiness of the product. He uses Wagyu beef from Brazoria County to make everything from steaks to meatballs and only uses heavy cream in his alfredo sauce.

“We took about a year trying to find the right spot in Katy,” he said.

Hembree wanted a location that would grow as he developed the restaurant into the dining experience he wants his patrons to have.

He also wants to make sure Grazia gives back. In 2017 his Pearland location alone raised more than $200,000 to give back to the community. Hembree said this is what Grazia is all about and regularly refers to his company motto: “Grazia means grace.”

“I’m not saying it because, hey, Grazia means grace,” he said. “I say it because I live my life that way as a father, as a husband, as a person [and] as a Christian. It’s the purpose that I built this brand on.”
SHARE THIS STORY