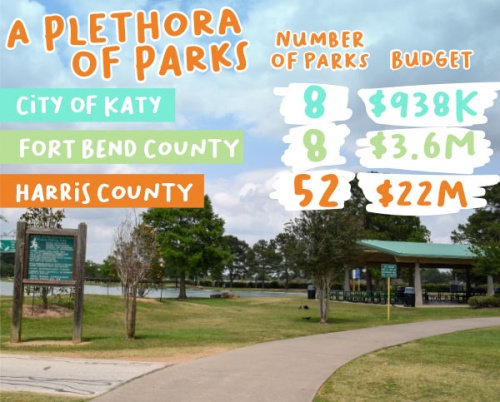 Improvements to parks and recreation projects are in the works in the Katy area for the next two years, said city and county officials.

Commissioner Steve Radack of Harris County Precinct 3 said parks that are coming to the Katy area and those being expanded are invaluable to the community, especially children. He said it is important for Katy residents to have green spaces to go to and bond with neighbors and be active.

“The assets of parks and getting families out together—getting them physically active, you name it—it’s the way to travel, particularly in the climate we live in,” Radack said.

After 17 years of development, Harris County Precinct 3 opened the park on April 23, Radack said. The 865-acre park lies between Katy and Cypress.

Radack said he sees the park as a model to be duplicated. While development has been slow, he said, the park’s lake was excavated cost-effectively using agreements with developers. Builders removed dirt from the site for fill soil. Radack estimated tens of millions of dollars have been saved as a result. He compared the park’s cost to that of Discovery Green, which cost $85 million.

“We’re not anywhere near that,” Radack said. “We won’t ever get to that because we’re getting so much of this done by developers taking soil off.”

The county paid $1.1 million dollars for the property in 2001 and more than $11 million on park amenities since then, Radack said. Funding was supplemented by $1 million from the Texas Parks & Wildlife Department.

“The Katy Prairie has been designated a globally important bird-watching area by [the National Audubon Society], so if John Paul’s Landing is doing more to protect and enhance our natural areas for migrating birds, that’s great,” Donovan said.

Donovan said the conservancy hopes park development will focus on preserving the environment and is encouraged by added interest in nature programs nearby.

Development for the park is not yet complete, Radack said. Future development will include expansion of the fishing lake, which also provides limited flood mitigation in the area.

“It’s what we call a wet-bottom lake; water’s going to stay in it, but it’ll be at a level where it can receive more water,” Radack said.

Donovan said the conservancy is excited about any addition to environmental education in the Katy community.

“What we tried to do was make it as best as we could, totally and completely family-oriented. Hopefully, we’ve achieved that,” Radack said.

The city of Katy approved a $5 million project to revitalize the city’s Old Katy District square in April. The city will use $1.5 million in hotel occupancy tax funds, $500,000 in insurance funds from damage to the old city administration building and $3 million in bonds approved by voters in 2000 to pay for the project.

Groundbreaking for the project will occur in June or July.

Most of the old city office building on Avenue C will be removed and the remainder remodeled. The City Annex on Second Street will also be remodeled. An outdoor museum under the water tower will show Katy’s history.

During an April 18 presentation to the city’s Convention and Tourism Bureau about the project, Reina and City Administrator Byron Hebert emphasized this is just the first phase for the plaza. Water and electrical lines will be installed for future improvements, such as lighting, an outdoor stage and covered walkway.

Hebert said that funding from hotels throughout the city could help fund future improvements to the plaza. This includes new hotels coming into the Katy Boardwalk project being developed just south of Katy Mills Mall.

“[The first phase] is going to take a year. In that year’s time, depending on how good these hotels do, we might be in a situation where we can go in and do another part of it,” Hebert said.

Reina said the city was happy to to preserve the City Annex building, which began as Katy’s first fire station.

“That’s why we wanted to keep that building,” Reina said. “It’s because we want to keep the integrity of the history that comes with it.”

The first phase of the plaza should be complete in late 2019, Reina said.

Officials are improving parks throughout the Katy area. Improvements will add recreation functionality to drainage features as well.

The city is developing land north of the Katy Dog Park at 5418 Franz Road. The land is being excavated as a water-detention pond. However, Reina said the city is considering a walking path around the detention pond, a butterfly refuge or bird-watching space with planted trees to add functionality. Initial development should be done in June, Hebert said.

“We really are trying to be strategic in the areas that we have a space,” Reina said. “So even if it serves as detention, we’re adding components to make it a park the majority of the time to benefit our residents.”

Fort Bend County has completed trail upgrades throughout its parks and recently installed new bathrooms in them, Parks and Fairground Director Michel Davis said. Future improvements include adding a trail around the new lakes at Jones Creek Ranch Park, just south of Fulshear on FM 359. The trail will include fishing piers, he said.

Lowering the power lines will allow continued development of Francesca’s Garden, a display within the park of native plants. Night vision security cameras and a security office building will be installed by 2020. Francesca’s Garden should be completed by 2022, he said.

“We’re just really proud of it, and we hope to get everything done in the next four or five years,” Kaplan said.

“There are so many more parks that need to be built and as long as I’m around, I’m going to keep going,” Radack said.
SHARE THIS STORY