Progress made on Katy Boardwalk District 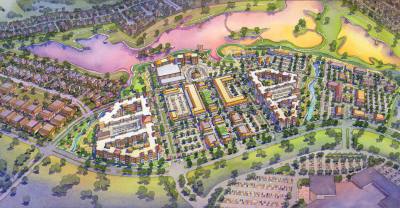 Construction on the first apartment complex will begin soon at Katy Boardwalk District.

The city broke ground in February on the Katy Boardwalk District, a mixed-use project with a boardwalk, nature trails, apartments, retail locations and restaurants. The project is located on the south and east sides of Katy Mills and will also include a manmade lake with an island.

The project is expected to bring $500 million in equity to the city, officials said in early 2017.

The site’s pond is completely dredged, and the sidewalks and walking trail, parking lots and restaurants should be completed this spring, along with the first street on the west side of the development, City Manager Byron Hebert said.

The electrical and water infrastructure are also under construction, Katy Mayor Chuck Brawner said. He added that Harvey did cause a delay, and the city is reviewing the drainage plans for the site.

“We’ve got to deal with [the poor weather] until this summer when it gets dry, then we can really move forward,” he said.

Construction will continue over the next few months. The selection of a hotel chain for the convention center is still pending, but should be settled soon, Brawner said in early January.