Katy-area emergency leader on Imelda: 'We were very fortunate' 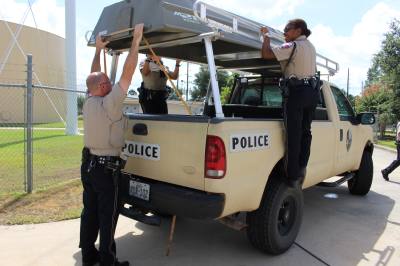 The city of Katy added a high-water vehicle and boat to its rescue equipment since Hurricane Harvey, but the city did not receive any emergency calls for rescues Sept. 19.

“For the most part, we were very fortunate,” said Greg Goedecker, Katy office of emergency management coordinator. “The city of Katy got about 1.5 inches to 3 inches of rain. We were very fortunate, and we're watching [the weather] very closely. We’d been watching it since Sunday [Sept. 15].

Goedecker said the city did not receive calls of high water or for rescues inside city limits. He added that the public works department checked normal problem spots and drainage systems.

“Everything drained well,” he said.

Some streets did flood in the Katy area, said Wendy Duncan, the co-founder of Barker Flood Prevention, a local group advocating flood-management solutions for the Barker Reservoir watershed. She explained that anytime more than 2 inches of rain falls per hour, streets will flood because storm drains cannot handle that amount of water.

“The Cinco Ranch Area received [3.5 inches] in one hour, which produced the severe street flooding we experienced,” she wrote on a 6:45 a.m. Sept. 20 Facebook update.

She added that the Willow Fork drainage channel and Buffalo Bayou performed well and are ready to handle any additional rains today.

Willowfork Fire Department Fire Chief Billy Wilson said the waters in the department's jurisdiction drained well and all streets are passible to his knowledge. No structural flooding was reported, through the department did answer calls for disabled vehicles and rescued one stranded motorist on Sept. 19, he said.

Most of the floodwaters drained by the evening of Sept. 19, Mitchell said. Harris County Emergency Services District No. 48 answered 15 calls for high-water rescues near South Mason and Fry roads as well as near I-10 and Highland Knolls Drive, HCESD 48 spokesperson Simon VanDyk said. None of the rescues were life threatening, and HCESD 48 had all three of its high water vehicles and booster trucks staffed and deployed during the rainfall.

“The west side [of the Greater Houston area] just didn’t have the volume of water that the east side did,” he said. “Here in Katy, it was just the low-lying areas.”

The Fulshear-Simonton Fire Department did not experience flooding in its district, Business Manager Brandi Crone said.

The city of Katy remains under a flash flood watch until 7 p.m., Goedecker said, adding that residents can expect scattered showers throughout the day.

“We’re not going to see the same heavy rain fall rates as yesterday,” he said.

“The potential for scattered showers and thunderstorms should develop east of I-45 in the morning hours before shifting west of I-45 by the afternoon,” according to the NWS alert. “Given the very saturated grounds and watersheds, it would not take much rain to exacerbate these conditions once again.”