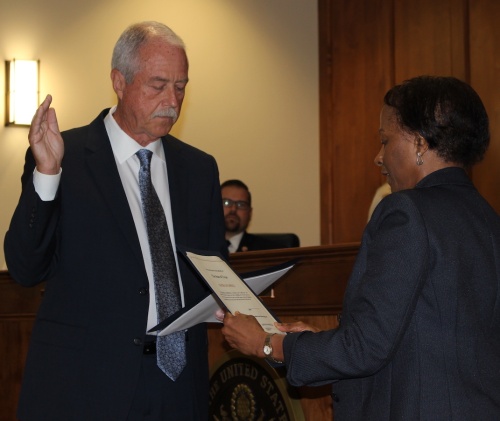 Correction: This story has been updated to show that Jenifer Stockdick ran against Steve Pierson to represent Ward B.

The city of Katy has a new council now that Bill Hastings and Jenifer Stockdick were sworn in at the May 14 Katy City Council meeting. Hastings won the mayoral race against incumbent Chuck Brawner May 4, while Stockdick won against Steve Pierson to represent Ward B.

Alongside new members, Frank O. Carroll—who served on council since Sept. 2018—was sworn in to represent Ward A. Carroll first joined council to complete the term of Gary Jones, who resigned for personal reasons, and this is his first time being elected to the position.

"I've spoke with everyone on council and we all have one common goal," Hastings said. "We're all up here to continue to make Katy the city and the community that everybody wants to move here for."

At the beginning of the meeting, Fire Chief Russell Wilson took the podium during public comments to acknowledge Brawner's success in helping the fire department transition from volunteer to full time as well as overseeing a program to address mental health issues among first responders in the city.

"Thank you Mayor Chuck Brawner for leading the good fight for public safety to keep all of our citizens safe and for all you've done," Wilson said.

Kayce Reyna, the city of Katy's director of marketing, compiled a presentation celebrating Brawner's achievements that was viewed during the May 14 meeting. It highlighted Brawner's accomplishments throughout his term, including his efforts during Hurricane Harvey, kicking off the renovation project at Katy Mills mall and advocating for more regulations on commercial vehicle traffic, improving road safety for Katy residents.

Hastings followed the presentation by thanking everyone who supported him, recognizing Brawner's hard work during his term, and promising to continue the projects he initiated, just as Brawner continued the projects that his predecessor, Fabol Hughes, had worked on.

"We're all going to work together," Hastings said. "This is going to be a great team and I look forward to the next three years."