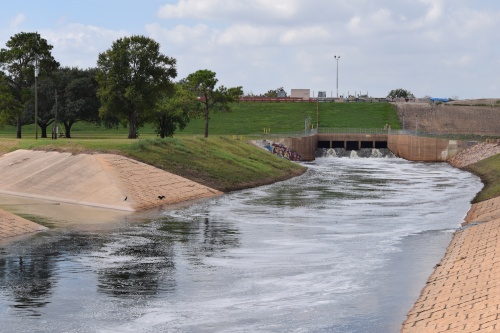 Hundreds of homes around the Barker Reservoir flooded during Hurricane Harvey, and its controlled release during the storm is now the subject of a trial.

More than a year after Hurricane Harvey flooded thousands of homes and businesses, a federal court is holding a trial regarding the Army Corps of Engineers’ operation of the Barker and Addicks reservoirs.

The U.S. Court of Federal Claims began a trial May 6 over claims from property owners who allege the Corps unlawfully stored stormwater on thousands of private properties upstream of the reservoirs during Hurricane Harvey, according to a court docket, the lawsuit and an email from Mary Conner of Irvine & Conner PLLC, one of the law firms representing the plaintiffs.

A separate trial will be held for properties downstream of the reservoirs, Conner said.

The plaintiffs allege the Corps intentionally flooded private properties around the Addicks and Barker reservoirs during Hurricane Harvey without permission from property owners and did not provide compensation to the property owners for using their property, according to the lawsuit, which was originally filed in September 2017.

The federal government cannot take private property for public use without providing compensation under the Fifth Amendment of the U.S. Constitution, according to Irvine & Conner’s website about the lawsuit, which aims to receive this compensation.

“There are approximately 10,000 property owners ... impacted in the entire upstream case,” Conner said. “Various law firms are representing various property owners. However, all cases are on hold while 13 test property cases are litigated at trial on the issue of the government’s liability.”

Judge Charles Lettow from the Court of Federal Claims traveled from Washington, D.C., to hold the trial in downtown Houston, she said.

“If we prove the government is liable for flooding of test properties, then we will determine with the court how to handle damages and also ... how to pursue class action treatment,” Conner said.

She explained a class action is a procedural tool to organize upstream property owners, and it can expedite the similar cases.

“If there is a class [action], then plaintiffs who are not the test properties can opt in to the class,” Conner said. “That means they can benefit from the liability finding of the 13 test properties. Ultimately, it is up to the judge how to handle these things.”

Homeowners have six years from the date of Hurricane Harvey to opt in to the lawsuit, she said. Fort Bend County filed a separate lawsuit related to the Corps' operation of Barker Reservoir during Hurricane Harvey.

The Corps—which is undertaking a study to find solutions to improve the safety of the reservoirs and lower flooding risks along the Buffalo Bayou—declined to comment on the litigation.

Previous Community Impact Newspaper reporting states Hurricane Harvey's rainfall from Aug. 25-29 filled the nearly 70-year-old dams to capacity and convinced the Corps to begin controlled releases of the reservoirs Aug. 28. The reservoirs had captured about 140 billion gallons of water from the storm, and the Corps released the floodwaters into Buffalo Bayou at a rate of a combined 13,000 cubic feet per second Aug. 30, up from 8,000 cubic feet per second Aug. 28. This release flooded thousands of homes.