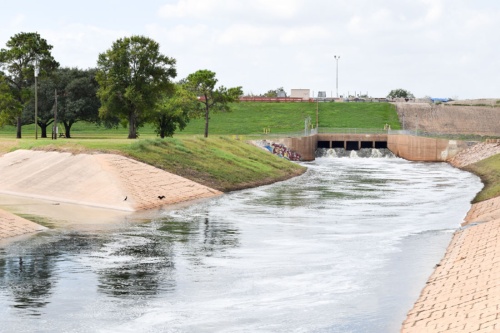 The Barker and Addicks reservoirs in West Houston are now dry but the consequences of their August releases are still unfolding nearly two months later by officials and surrounding residents.

“By the time that Harvey had dumped 1 trillion gallons of rain in Harris County alone, the reservoirs had captured about 140 billion gallons of that water,” Col. Paul Owen, commander and division engineer of the USACE’s southwest division, said at an Oct. 3 community meeting in the Memorial area of Houston.

As a result, the public has asked county, state and federal officials why the dams were opened, if flooding could have been prevented and what options, such as a third reservoir on Cypress Creek reservoir, lie ahead.

Residents at the Oct. 3 meeting criticized the USACE for a perceived lack of warning before the releases. Some residents in nearby neighborhoods have sought legal action against the federal government, while others are pursuing buyouts of their properties.

“At the time [the release decision] was made, it was foreseeable and the Corps knew, or should have known, that it was sacrificing and condemning hundreds or even thousands of homes along Buffalo Bayou, including the real property, their contents and their future property values,” said a class-action suit filed in federal claims court Sept. 6 by property owners whose homes flooded after the releases.

However, Arturo Leon, an associate professor in the University of Houston’s Civil and Environmental Engineering Department, sided with the USACE’s release decision to prevent the dams from breaking.

“If the dam had collapsed, you would have had tens of feet of water at the velocity of 100 feet per second rushing downstream of the dam, and that would have wiped out several houses,” Leon said.

This is not the first time the condition of the Barker and Addicks reservoirs have been critiqued. The Harris County Flood Control District published the Katy Freeway Corridor Flood Control Study in 1996, claiming the structures were insufficient to protect homes at the reservoir’s fringes and along Buffalo Bayou from flooding, and that the dams did not function as originally intended.

The Barker and Addicks reservoirs were built in 1945 and 1948, respectively, to prevent flooding in downtown Houston.

“The primary flood threat facing the citizens of west Harris County and West Houston comes from the inability to drain the Addicks and Barker reservoirs in an efficient manner,” the study said. “It is conceivable and not hard to imagine that a single storm event could have a catastrophic impact to several thousand people in the reservoirs and the fringe areas.”

The document partly blamed the reservoirs’ gate designs and the USACE criteria for emptying the reservoirs. Dam operators also said in a public meeting March 6, 2016, that the structures were considered high risk, particularly the release gates and dam ends.

A $71.9 million renovation project began in 2015. Shannon Bauer, public affairs officer for the USACE, said the project was 25 percent complete when Harvey hit, and it will likely take until mid-to-late 2020 to finish the project.

“I wish I had the authority to buy enough land to be able to hold all the water that would back up onto [people’s homes],” Radack said. “I wish the congresspeople … would have paid more attention to the flooding in this county.”

When the federal government purchased land for the reservoirs, the surrounding properties were mostly agricultural. Today, that land is entirely developed. Harris and Fort Bend county officials said they cannot outright prohibit building on a flood plain.

Meanwhile, Texas Real Estate Code states a seller must only disclose if they know that a home is within the 100-year flood plain or if the home has flooded before.

“A cautious buyer is going to want to do some due diligence above and beyond the minimum requirement,” said Katy real estate attorney Stuart Levin of Levin & Atwood LLP.

Residents of Canyon Gate in Katy are some of the many homeowners who have said they bought their homes unaware they were within the 500-year flood plain. Canyon Gate Homeowners Association President Bernadette Leaney said this was the first time her neighborhood flooded.

“I think the houses are going to come back better,” she said. “Are there still sad stories? Yes, because a lot of people were not insured.”

All 721 homes in Canyon Gate were affected, but Leaney predicted the majority of homeowners will want to stay and remodel their properties to a higher standard than before the flooding.

“You got to bear in mind: In 70 years, water has never been that high,” Radack said. “It’s a battle against nature.”

Leon also said the flooding was inevitable as the city’s bayous were overwhelmed. However, Owen said widening Buffalo Bayou would need the surrounding community support.

Harris County has considered building a third reservoir at least since the 1950s, County Judge Ed Emmett told Community Impact Newspaper in September. Repairing Barker and Addicks requires federal money, but a third reservoir could be built with local dollars.

“[Congress] built the first two reservoirs; that’s who funds the [Army] Corps of Engineers. If that doesn’t come forward—if that has to come from the state or local government—then state government could do it,” Emmett said. “And if the state doesn’t do it, if they have to go on the county; then the only way to do it is through a bond issue approved by the voters that would give more property tax revenue to the Harris County Flood Control District.”

“It is time, in my view, that we move forward and we build that dam on Cypress [Creek] as well as the White Oak Bayou, and as well as the west branch of the San Jacinto [River],” Patrick said.

Radack said he has advocated over the past 20 years for more flood mitigation funding in Harris County. The Precinct 3 commissioner said he has also encouraged all area residents to buy flood insurance.

The region has had three major flooding events in as many years, and with climate change, Leon said weather systems can become less predictable. However, he added engineering measures can be taken to reduce future risks.

He suggested an elevated aqueduct or canal that can act as a highway on dry days, or asking private homes within the watershed to keep retention areas for a citywide storage network.

“Events similar to Harvey, in my opinion, will be regular, will be common in the next decade,” Leon said. “This will not be a 500-year event—these things will happen.”