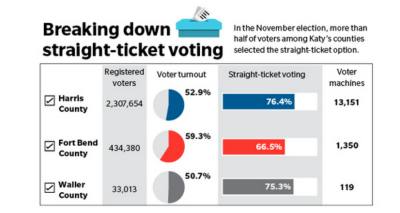 The removal of straight-ticket voting is expected to cause challenges for conducting elections, officials from Fort Bend and Harris counties said.

“The effect [of removing straight-ticket voting] will be that people will spend more time in the voting booth,” a February report from the Austin Community College District Center for Public Policy and Political Studies stated. “If a voter wishes to cast a straight-ticket vote, patience and perseverance will be required.”

Fort Bend County Judge KP George said his county expects the average voting time to increase from three to 10 minutes at the machines with the removal of straight-ticket voting.

This will cause more wear and tear on the county’s 1,300 voting machines, which are constantly being sent for repairs on the motherboard and screens, George’s Chief of Staff Taral Patel said at a special session of the county’s Commissioners Court on Jan. 8.

“Additionally, there’s projected to be a lot more voters than we have now,” Patel added. “With those things coupled, we actually don’t have the amount of elections machines we need to make sure we are on the same trajectory.”

The county estimates it will need about $12 million to upgrade its voting machines. Fort Bend County Elections Administrator John Oldham said the county will need several hundred more machines to accommodate not only doing away with straight-ticket voting but also the growing population in Fort Bend County.

Officials are relying on legislation such as House Bill 362, authored by state Rep. Celia Israel, D-Austin, that would create a fund to assist local governments with the acquisition of voting system equipment.

Harris County will not have to purchase new machines, but the county is concerned about the removal of straight-ticket voting, Harris County Clerk Diane Trautman said in an email.

“Election administrators will face challenges across the state with the removal of straight-ticket voting,” she said. “All voters will be impacted with this new voting process.”

Trautman said her office has increased the number of early voting sites and the hours for early voting. Additionally, Harris County voters can now vote at any polling location countywide on election day after the county’s application to participate in the Countywide Polling Place Program was approved in March.

“[A] new website wait-time feature component [will also] address lines at the polling locations during early voting and [on] election day,” Trautman said.

Although Harris and Fort Bend counties are worried about the removal of the straight-ticket voting option, Waller County does not expect any difficulties in conducting future elections, Waller County Elections Administrator Christy Eason said in an email.

“The removal of straight-party voting should increase voter education,” Eason said when asked whether there were any benefits of the new law.

“Education of the party’s voters will be essential in this new system in which there will be no straight-ticket voting,” per the report.

George said he felt straight-ticket voting offered some benefits, but he is bracing for the elimination of the option for the 2020 elections.

“It is a serious matter, and we are aware of it,” George said. “I’m hoping the state Legislature this time around comes up with some solution.”
SHARE THIS STORY 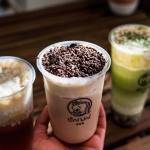