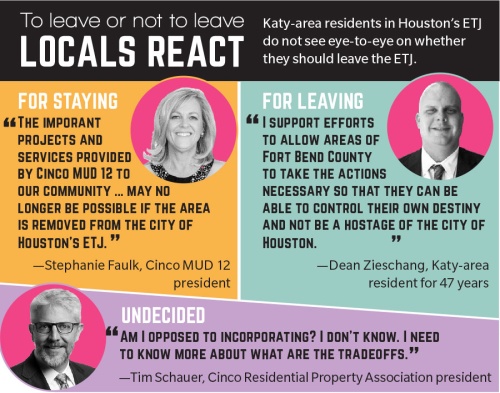 Editor’s note: This is the third article of a multipart series about legislation related to unincorporated areas in the Greater Houston area.

About 272,000 Katy-area residents live in the city of Houston’s extraterritorial jurisdiction, or a band of unincorporated land surrounding the city’s limits that Houston can eventually annex.

However, there is no way for these residents to remove themselves from the ETJ if they want to, Fort Bend County Precinct 3 Commissioner Andy Meyers said.

“These people are in no man’s land,” he said. “There’s nothing they can do currently. They’re just stuck.”

Fort Bend County residents may have an option to remove themselves from Houston’s ETJ if House Bill 958 becomes law this legislative session.

Katy-area residents have expressed differing viewpoints on whether to remain in the ETJ. Some said they are worried about the financial implications, while others stated a desire to escape from Houston.

“The status quo doesn’t seem very palatable, but if we’re going to move from the status quo to another model, then … let’s do a cost-benefit analysis, and let’s make a reasonable, rational decision,” said Tim Schauer, president of the Cinco Residential Property Association.

The ETJ is a boundary up to 5 miles past a city’s limits that the city can eventually annex. The city of Houston regulates development in its ETJ and can collect sales taxes through strategic partnership agreements, but it is not required to provide services, per state law. Instead, counties, municipal utility districts and other entities supply the services. Also, ETJ residents cannot vote in city elections.

Houston has not initiated any major full-purpose annexations since 1995-96, when it annexed the Kingwood area, said Rupesh Koshy, a planning leader in the Houston Planning and Development Department.

He said Houston has not initiated nor has plans to initiate full-purpose annexations. These decisions are based on a cost-benefit analysis.

Senate Bill 6, which became law in December 2017, has made it nearly impossible for Houston to complete a general-purpose annexation, Meyers said. Under SB 6, 100 percent of residents must agree on city annexation.

This is unlikely to occur in Fort Bend and Harris counties, Meyers and Harris County Precinct 3 Commissioner Steve Radack said.

Houston can release land—and the planning department receives numerous applications for release—from its ETJ but does so only if certain criteria are met, Koshy said. The land is unlikely to be released if an ETJ parcel has existing or future retail or industrial development or if the city will lose revenue.

Meyers and several state legislators aim to give voters an option to remove themselves from Houston’s ETJ this legislative session.

If passed, HB 958 would allow Fort Bend County residents—not Harris or Waller county residents—living in Houston’s ETJ the option to petition to remove themselves and create a new city; join another city; or remain wholly unincorporated.

State Rep. Rick Miller, R-Sugar Land, filed the bill. State Reps. John Zerwas, R-Richmond, and Phil Stephenson, R-Wharton, are co-authors of HB 958, which was sitting in the Land and Resource Management Committee as of press time.

“The commissioner is basically putting this forward as a way for people to basically declare, ‘I don’t want to be part of this ETJ. I want out of this ETJ.’ and there be a way to get to that point,” Zerwas said.

Bill Kelly, the city of Houston Government Relations Department director, said in an email the city had no comment on HB 958.

Radack said the city of Houston has made building in the ETJ very difficult for the Harris County Commissioners Court.

“We have to deal with [Houston] and their planning commissioner sometimes not allowing plats to be approved simply because it didn’t follow some little rule that the city has in place when the city has no plans to even annex,” Radack said.

HB 3417 was referred to the Land and Resource Management Committee, which held a public hearing April 2. The committee passed the bill with a substitute, and it was sent April 9 to be scheduled on the Local, Consent and Resolutions Calendar.

The Katy-area community has shown both support and opposition for HB 958.

Dean Zieschang, a Katy-area resident for 47 years, said he backs the bill at the Jan. 29 Fort Bend Commissioners Court meeting.

“I support efforts to allow areas of Fort Bend County to take the actions necessary so that they can be able to control their own destiny and not be a hostage of the city of Houston as they don’t provide services,” he said.

Falcon Point resident AD Muller said he agreed, though he said it was unlikely the city of Katy would annex nearby areas due to the high cost of providing services.

In a 2018 interview with Community Impact Newspaper, Katy Mayor Chuck Brawner stated the city would have to seriously consider the financial implications before annexing any land.

“The ETJ only benefits the city of Houston,” Serrett said. “And the other that benefits, of course, is the MUDs.”

He said those two entities benefit through SPAs in which the city of Houston collects a sales tax on retail establishments in a MUD and shares the revenue with the MUD. Houston spends this sales tax money within its city limits, while a MUD spends its share of the funds on local projects, officials with the city, county and MUDs said.

SPAs are a reason why some residents are not in favor of removing themselves from the ETJ. Cinco MUD 12 President Stephanie Faulk and about 25 others expressed via written and oral comments on their opposition to HB 958 at the Jan. 28 Fort Bend Commissioners Court.

In an email, Faulk said Cinco MUD 12 has a 30-year SPA contract with the city of Houston and has used its sales tax share for sidewalks, parks, storm recovery and security. She said the MUD was concerned if the master-planned community Cinco Ranch was released from the ETJ, it would no longer receive that source of revenue.

Meyers said being released from the ETJ would not affect SPAs because of contractual law.

Schauer said he was neither for nor against the bill; there are too many factors to be discussed. Schauer said he wanted urban planning experts to explain the pros and cons of every option as well as allow the 18,200 or so residents discuss Cinco Ranch’s future.

“There’s a lot of discussions that needs to happen about how our community moves through the next couple of decades because we’re starting to have issues as a major kind of urban area,” he said. “Once you have population density, you have challenges of maintaining infrastructure, maintaining your community standards.”

Meyers’ goal with promoting HB 958 is to allow ETJ residents to determine the direction of their communities.

“All I’m trying to do is give people the opportunity to control their own destiny so that they’re not controlled by the city Houston,” Meyers said.