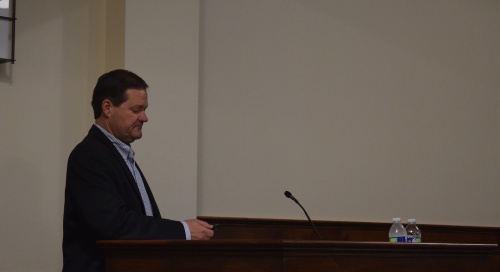 Katy City Administrator Byron Hebert delivers a presentation Friday on the proposed budget for the city and the factors that are influencing the city's financial situation.

Katy City Council held a budget workshop Friday morning to hear a presentation and obtain clarifications from City Administrator Byron Hebert. The proposed fiscal year 2018-19 budget, which includes a 3 percent cost-of-living increase for city staff, totals about $28.5 million and is balanced between revenue and expenditures despite constraints caused by flooding events the past two consecutive years.

“Let’s not forget where we were,” Hebert said, referring to the aftermath of Hurricane Harvey. “I want everyone in this room to understand how much work they’ve done dealing with two catastrophic storms.”

Hebert was speaking to city staffers who crowded the room to answer any questions posed by council members.

Hebert said the city has some positive factors economically that have helped the city maintain services while keeping a balanced budget, especially given the growth the city has seen in recent years. Residential growth continues to increase, he said, including projects, such as Cane Island, Falls at Green Meadows and the Reserves of Katy subdivisions. Commercial growth continues with the completion of the Amazon plant nearby and Buc-ee’s, as well as the upcoming American Warehouse Furniture to be located at the intersection of Peek Road and I-10.

Notable new expenses included buying a new street sweeper and hiring a crew to run it as well as adding seven new patrol officers to the Katy Police Department. Police Chief Bill Hastings said the new officers would help the city keep up with growth and ensure the department continues to provide quality services to city residents. Hastings said growth was beginning to put a strain on the department.

“Our patrol division hasn’t grown quite as much as we would have liked it to,” Hastings said.

Public hearings on the proposed budget will be announced at Monday’s City Council meeting, which will include another public hearing on building standards for the city to protect residents from flooding.